There was one piece of very good news that came out of yesterday’s House vote on the debt ceiling. 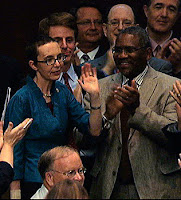 Slowly, with a sense of purpose, Rep. Gabrielle Giffords entered the House chamber Monday night to cast her first vote since she was shot in the head last January, a dramatic return that surprised colleagues. The chamber erupted in loud, sustained applause as Democrats enveloped Giffords with hugs and kisses.

Only minutes remained on an historic vote on the debt-limit bill. Most lawmakers were staring at the vote board when Giffords made her way through the door on the right side of the chamber. Few knew in advance that she would appear.

Democrats crowded around her as she mouthed “thank-you’s.” She used one hand to greet some, the other by her side. Her hair was dark and closely cropped, and she wore glasses. Her image was quite different from the one Americans saw seven months ago when she was sworn-in by House Speaker John Boehner, R-Ohio.

In the House chamber, colleagues, stunned and joyful, made their way to greet Giffords.

“It means so much to our country … to witness the return of our colleague who is the personification of courage, of sincerity, of admiration throughout the country,” Democratic leader Nancy Pelosi of California told the House.

Her return is “a triumph of the first magnitude and we are all so very proud of her,” said Rep. Trent Franks, R-Ariz.

Giffords cast her vote – “yes” – and left the House chamber and the Capitol.

Talk about a profile in courage.