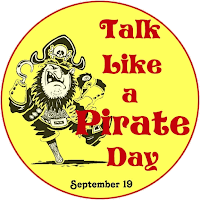 At first an inside joke between two friends, the holiday gained exposure when John Baur and Mark Summers sent a letter about their invented holiday to the American syndicated humor columnist Dave Barry in 2002. Barry liked the idea and promoted the day. Growing media coverage of the holiday after Barry’s column has ensured that this event is now celebrated internationally, and Baur and Summers now sell books and T-shirts on their website related to the theme. Part of the success for the international spread of the holiday has been attributed to non-restriction of the idea or trademarking, in effect opening the holiday for creativity and “viral” growth.

So grab your copy of Treasure Island…