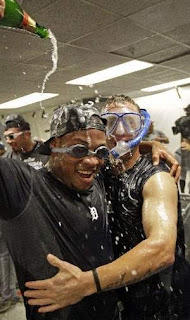 OAKLAND — It wouldn’t have been right if the charismatic closer hadn’t allowed a double to the A’s leadoff hitter as Detroit was trying to clinch its first division in 24 years. After all, baseball, if nothing else, is about patterns, and on the coast, at the O.co Coliseum, the Tigers were looking to ride out the pattern one last time.

Already, Doug Fister had pitched another masterfully efficient eight innings — giving up one run on three hits. Already, Don Kelly had homered and driven in another run with a single. And Wilson Betemit had tripled. The team had cobbled together three runs from newcomers and unlikely places.

Wasn’t that what helped propel them to the precipice in the first place?

So here it was, after midnight in Detroit, the Tigers up, 3-1, in the ninth, Jose Valverde on the mound, three outs from a spot in the playoffs. As he has often done this season, he allowed the leadoff man to reach base. As he also done this season, he shut the door quickly.

Striking out Jemile Weeks. Inducing a pop-up from Hideki Matsui. Coaxing a harmless grounder from Josh Willingham that Brandon Inge scooped up and fired to first to end the game.

When Miguel Cabrera caught it, Alex Avila sprinted to the mound and embraced Valverde. The team joined them, forming a jumping circle to celebrate.

How did it feel?

But only for a moment, because the moment starts to settle and you start to realize what you’ve just accomplished.

“You really can’t explain it,” said Leyland. “It’s a special moment. You can’t put a price tag on it.”