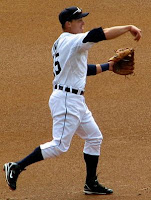 Everything looked good for the Tigers in last night’s game six for the ALCS. They got two home runs in the first two innings, and Max Scherzer had his pitching under control. And then came the third inning, and… Well, the season is over for Detroit.

I’ll leave it to the experts and the analysts to examine the minutiae of the last game and the series and let them come up with the reasons that the team is flying home for the winter instead of going on to face either the Cardinals or the Brewers. (My ancestry determines that I will cheer for the St. Louis team in the series, and I will do so gladly.) I’m just a guy in the stands who likes to watch a good game and people who like playing it, and in every game I saw this year, either camped out on my parents’ sunporch when I was on vacation, in my living room on those rare occasions when they played in Florida, or the video-game version via Gameday, I felt the love for the game and the competitive spirit that comes from playing well together. Baseball isn’t a game of brute power where nothing but physical strength matters; the 175-pound kid has a much a chance of being the hero as the 250-pound hulk. The sight of two players from opposite teams chatting as one of them takes his lead off first base is the microcosm of the game; they’re people first — maybe even friends — as well as competitors. They’re not hidden behind pounds of protective gear… at least not openly. It’s a contact sport, but not in the way football or even basketball is.

Justin Verlander, with his 24 wins as a pitcher, will win the American League Cy Young award, and perhaps even the MVP for the season. That’s impressive, but it’s also impressive that a player whose team is not in the World Series could win those awards. It’s part of the sportsmanship of this particular game and takes into account the whole season, not just the last month. It acknowledges the work of the team, too; Justin Verlander is an amazing pitcher, but he’ll be the first to tell you that he didn’t do it alone.

So, to the Tigers I say that you have nothing to apologize for this year. You gave it your best: you got through the slumps, through the injuries, and the times when your fans wanted to switch off the game and go read a book, but you never let up. So to all of you: thanks. Have a good winter, rest up, pump up, and we’ll be waiting for that day when, as the immortal Ernie Harwell would announce, “For lo, the winter is past, the rain is over and gone; the flowers appear on the earth; the time of the singing of birds is come, and the voice of the turtle is heard in our land.”