Steve Jobs, the man who took the computer from the lab and into the home and changed the world, has died.

My first computer was an Apple IIc, purchased at Schaack Electronics in Boulder in 1984 for $1,500. I wrote my doctoral thesis on it, along with several plays, untold numbers of letters and stories, and, starting in 1990, a lot of window and door quotes and orders. This was before the internet, before DSL (a modem was an extra-cost option), and turning on the computer meant loading three or four floppy discs. But it worked, and my IBM Selectric, a relic of 1966, went to Goodwill. 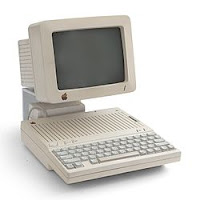 In 1997 I switched to a PC — some say I went over to the dark side — because my job used PC’s and Windows. The Apple went back into its boxes and I still have them in the garage.

I don’t have an iPod, an iPhone, or an iPad. That’s not because I have anything against them; I’m just not someone who has a lot of gadgets. But there’s no doubt that Mr. Jobs’ contribution to our world and our culture goes far beyond the pieces of equipment. In the same way that the printing press was more than just a collection of metal and plates and slugs of lead, the computer and the technology that comes with them are much more than the sum of the parts. They are reflective of the people who use them to express themselves, to enrich themselves and our civilization, and for all of the perils and dangers that progress brings, it isn’t the machines that make them what they are; it’s the people who use them.

Steve Jobs saw these machines as an extension of humanity; putting the person in personal computing.

I hold him and his family in the Light.