The mainstream media is so in the tank for President Obama that it’s not even funny. Nor is it true.

It isn’t easy being the guy in charge. A new study from Pew Research Center of campaign coverage finds that only 9% of news reports on President Obama have been “positive,” easily the lowest number of any of the major candidates. Surprisingly, Rick Perry fares the best with 32% positive coverage and non-candidate Sarah Palin is right behind him at 31%. Take a look: 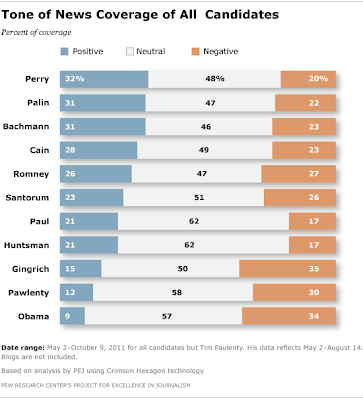 (Click to embiggen.
When you’re just one step ahead of Newt Gingrich, then you know you’re really getting a free pass.