Tommy Tune, the Tony-award winning director/choreographer of such shows as The Best Little Whorehouse in Texas, Nine, Grand Hotel and The Will Rogers Follies is the guest artist this semester at the University of Miami’s Jerry Herman Ring Theatre (my undergrad alma mater). He’s created a musical, Fifty Four Forever, a tribute to the dizzy and druggie days of disco at the legendary Studio Fifty Four, and it’s getting noticed by the New York Times. 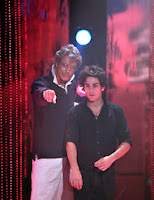 If developing a Studio 54 musical — which includes disco anthems like “Y.M.C.A.” and “Stayin’ Alive” — on a Florida campus seems strange, even more surprising is that the scene has seldom been dramatized. The 1998 film “54,” with Mike Myers as Rubell, was a critical and financial disappointment, and there have been a handful of books about the club. Mr. Tune, as well as theater historians, said they did not know of any stage musicals developed by major artists about Rubell, who was a next-door neighbor of Mr. Tune’s in New York and who comes in for affectionate treatment here.

Mr. Tune’s untamed theatricality seems an apt fit for the wild times of Studio 54, say many in the theater industry who are familiar with his work.

“Musicalizing Studio 54 would take an imagination that could never be put in a box, that is sometimes too wild even for its own good, and that’s Tommy’s,” said Peter Filichia, a theater critic who writes about Mr. Tune in his book “Broadway Musical MVPs 1960-2010: The Most Valuable Players of the Past 50 Seasons.” “In the first ‘Whorehouse’ there were just so many crazy design touches and stage pictures, and in ‘Grand Hotel’ there was such incredible extravagance I found myself wondering how he would top himself in the next scene. And then he would.”

The show runs through Saturday, November 19.