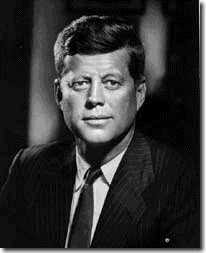 Friday, November 22, 1963. I was in the sixth grade in Toledo, Ohio. I had to skip Phys Ed because I was just getting over bronchitis, so I was in a study hall when a classmate came up from the locker room in the school basement to say, “Kennedy’s dead.” We had a boy in our class named Kennedy, and I wondered what had happened – an errant fatal blow with a dodgeball? A few minutes later, though, it was made clear to us at a hastily-summoned assembly, and we were soon put on the busses and sent home. Girls were crying.

There was a newspaper strike at The Blade, so the only papers we could get were either from Detroit or Cleveland. (The union at The Blade, realizing they were missing the story of the century, agreed to immediately resume publication and settle their differences in other ways.) Television, though, was the medium of choice, and I remember the black-and-white images of the arrival of Air Force One at Andrews, the casket being lowered, President Johnson speaking on the tarmac, and the events of the weekend – Oswald, Ruby, the long slow funeral parade, “Eternal Father, Strong to Save” – merging into one long black-and-white flicker, finally closing on Monday night with the eternal flame guttering in the cold breeze.

I suspect that John F. Kennedy would be bitterly disappointed that the only thing remembered about his life was how he left it and how it colored everything he did leading up to it. The Bay of Pigs, the steel crisis, the Cuban missle crisis, the Test Ban Treaty, even the space program are dramatized by his death. They became the stuff of legend, not governing, and history should not be preserved as fable.

I never thought I’d be old enough to look back forty-eight years to that time. And according to NPR, sixty percent of Americans alive today were not yet born on that day. Today the question is not do you remember JFK, but what did his brief time leave behind. Speculation is rife as to what he did or did not accomplish – would we have gone in deeper in Vietnam? Would he have pushed civil rights? Would the Cold War have lasted? We’ll never know, and frankly, pursuing such questions is a waste of time. Had JFK never been assassinated, chances are he would have been re-elected in 1964, crushing Barry Goldwater, but leading an administration that was more style than substance, battling with his own party as much as with the Republicans, much like Clinton did in the 1990’s. According to medical records, he would have been lucky to live into his sixties, dying from natural causes in the 1980’s, and he would have been remembered fondly for his charm and wit – and his beautiful wife – more than what he accomplished in eight years of an average presidency.

But it was those six seconds in Dealy Plaza that defined him. Each generation has one of those moments. For my parents it was Pearl Harbor in 1941 or the flash from Warm Springs in April 1945. Today it is Challenger in 1986, and of course September 11, 2001. And in all cases, it is what the moment means to us. It is the play, not the players. We see things as they were, contrast to how they are, and measure the differences, and by that, we measure ourselves.