Pre-Occupied — In The New Yorker, Mattathias Schwartz profiles Kalle Lasn and Micah White, the activists behind the OWS movement. 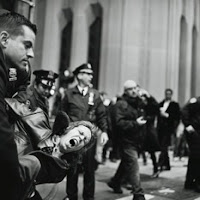 Kalle Lasn spends most nights shuffling clippings into a binder of plastic sleeves, each of which represents one page of an issue of Adbusters, a bimonthly magazine that he founded and edits. It is a tactile process, like making a collage, and occasionally Lasn will run a page with his own looped cursive scrawl on it. From this absorbing work, Lasn acquired the habit of avoiding the news after dark. So it was not until the morning of Tuesday, November 15th, that he learned that hundreds of police officers had massed in lower Manhattan at 1 A.M. and cleared the camp at Zuccotti Park. If anyone could claim responsibility for the Zuccotti situation, it was Lasn: Adbusters had come up with the idea of an encampment, the date the initial occupation would start, and the name of the protest—Occupy Wall Street. Now the epicenter of the movement had been raided. Lasn began thinking of reasons that this might be a good thing.

Lasn is sixty-nine years old and lives with his wife on a five-acre farm outside Vancouver. He has thinning white hair and the small eyes of a bulldog. In a lilting voice, he speaks of “a dark age coming for humanity” and of “killing capitalism,” alternating gusts of passion with gentle laughter. He has learned not to let premonitions of apocalypse spoil his good mood.

The magazine, which he founded twenty-two years ago, depicts the developed world as a nightmare of environmental collapse and spiritual hollowness, driven to the brink of destruction by its consumer appetites. Adbusters’ images—a breastfeeding baby tattooed with corporate logos; a smiling Barack Obama with a clown’s ball on his nose—are combined with equally provocative texts and turned into a paginated montage. Adbusters is not the only radical magazine calling for the end of life as we know it, but it is by far the best-looking.

Lasn was interrupted by a phone call about the Zuccotti eviction while in bed, reading Julian Barnes’s “The Sense of an Ending.” He rose and checked his e-mail. There was a message from Micah White, Adbusters’ senior editor and Lasn’s closest collaborator.

“Eerie timing!” White wrote. Earlier that night, Adbusters had sent out its most recent “tactical briefing”—a mass e-mail to ninety thousand friends of the magazine—proposing that the nation’s Occupy protesters throw a party in mid-December, declare victory, and withdraw from their encampments. A few hours later, officers from the New York Police Department began handing out notices stating that the park had become dangerous and unsanitary, and ordering the protesters to leave, so that it could be cleaned. Those who refused to go were arrested, and whatever they left behind was carried off by the Department of Sanitation, to a depot on West Fifty-seventh Street. After a long night of angry marches and meetings, the protesters were allowed back into Zuccotti, with newly enforced prohibitions on tents and on lying down. The protest continued, but the fifty-nine days of rude, anarchic freedom on a patch of granite in lower Manhattan were over.

Every Thanksgiving Mom and Dad and my siblings, Randy, Robin and Dorrie, and I piled into the station wagon and headed to Grammy Hall’s Spanish duplex on Rangeview Avenue in Highland Park, Calif. Dad pulled the car up the concrete driveway to the home of his mother, Mary Alice. Nobody knew where she got the money to buy a building, but she did. And she managed to hold on to her 3,000-square-foot stucco box until she and her sister, Sadie, died next to each other on hospital beds in the dining room, the same room where we ate our annual Thanksgiving dinner.

When we opened the door it was always the same: a huge spread was ready to go. There were no prayers of gratitude, or chitchat. We ate. A lot. My favorite dish was Aunt Sadie’s special stuffing, filled with bacon bits, turkey giblets, and loaded with gooey bread steeped in plenty of butter. Oh, and salt; lots of salt. Combined with Ocean Spray canned cranberry sauce, it was the most delicious sweet, sour and salty combo ever. I’ll never forget the Tupperware bowls filled with dill pickles, sweet gherkins, and bean and cheese dip with saltine crackers, too. Grammy’s serving platters were piled high with mashed potatoes and gravy and string beans. The turkey was the centerpiece. It took up most of the table. Mom brought her famous tuna casserole made with mushroom soup, chow mein noodles, and cashew nuts. Dessert never changed. It was always German chocolate cake, and Mom’s pumpkin pie with vanilla ice cream, which Grammy conveniently forgot to put on the table year after year.

Don’t Quit Your Day Job — Betsy Morais looks at what some writers did before — and while — they were writers.

Franz Kafka was a legal secretary at the Workmen’s Accident Insurance Institute for the Kingdom of Bohemia in Prague (later: In the Czech Lands), where he wrote reports like “Accident Prevention in Quarries,” and rose to a top office position, Obersekretär. Though his bureaucratic labors bore literary fruit—providing context and imagery for his fiction writing—Kafka came to feel bogged down by the daily grind. “Writing and office cannot be reconciled, since writing has its center of gravity in depth, whereas the office is on the surface of life,” he wrote to his fiancée in 1913. “So it goes up and down, and one is bound to be torn asunder in the process.”

T.S. Eliot, on the other hand, was inclined to keep his day job even after it was financially necessary. When the Bloomsbury group offered to set up a fund that would allow him sufficient funding to become a full-time writer, the poet turned them down. “This idea that Eliot should be freed from the drudgery of work misses the point that he was actually very interested in the minutiae of everyday life—he was a commentator on the quotidian,” British Library curator Rachel Foss told The Guardian.

And then there were the young writers with unrealized ambition and bills to pay. Anton Chekov was a physician. Laura Ingalls Wilder taught a class of five students in a one-room schoolhouse, and later became secretary-treasurer of the Mansfield Farm Loan Association in Missouri. John Steinbeck spent the summer of 1928 giving tours of a fish hatchery in Lake Tahoe, where he met his future wife. After losing that job in the fall, Steinbeck followed her to San Francisco, where he became a warehouseman at the Bemis Bag Company factory. Margarite Duras wrote technical reports as an assistant in the French Colonial Office, and then worked on publicity for French bananas and tea. Anne Sexton was a fashion model. At an evening writing seminar taught by Robert Lowell, she met Sylvia Plath, who was working by day as a receptionist in the psychiatric unit of Massachusetts General Hospital. Harper Lee shelved books and rang up sales in a shop, and then got a gig as an airline ticket clerk—first for Eastern Airlines, then for the British Overseas Air Corporation. Unable to afford a real desk, she wrote on a door that she lay across two sawhorses.

Doonesbury — On the nose.