Brace yourself, kiddies; it’s gonna be a long slog to New Years. 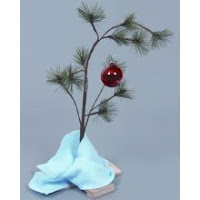 It seemed like a simple little idea. The Christmas tree industry, which has been struggling in recent years, wanted to fund a promotional program, encouraging consumers to buy real, rather than artificial, trees over the holiday season. The idea was for Christmas trees to follow in the footsteps of milk, beef, and cotton, all of which benefited from successful promotional campaigns.

To pay for the effort, the industry launched the Christmas Tree Promotion, Research and Information Order, asking the Agriculture Department to approve a 15-cent fee, per tree, on domestic producers and importers. It was requested by the industry, to benefit the industry, and to be paid for by the industry.

The Agriculture Department solicited public feedback, and most supported the proposal. This week, officials gave the industry the green light to proceed.

And that’s when Republican hacks decided to intervene.

Some loons decided the Obama administration wants to impose a new “tax” on Christmas trees because the president “hates Christians.” National Christmas Tree Association spokesman Rick Dungey tried to explain this “has absolutely nothing to do with Obama,” and “it’s not a tax,” but it was too late — the right-wing message machine had already kicked into gear.

So the White House backed out of the fee — which had been requested by the Christmas tree industry in the first place — because they know that it’s not worth wasting the time arguing with a bunch of right-wing idiots over fifteen cents.