He’s So Smart — Frank Bruni explains the rise of Newt. 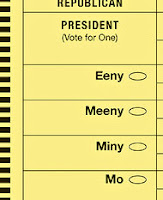 Of all the please-God-not-Mitt surges in the Republican contest, Newt Gingrich’s is the strangest.

And that’s not because of his marital mishaps. Or his lobbying that’s somehow magically something other than lobbying. Or his peevishness, comparable to that of an 18-month-old separated from the lollipop he snatched when Mommy’s back was turned.

It’s Gingrich’s braininess — or at least his preening assertion of such — that doesn’t quite fit, breaking the Republican pattern of late. How does an ostentatious know-it-all fare so well in a party supposedly hostile to intellectuals and intellectualism?

If you consider how ardently Republicans courted Mitch Daniels, Paul Ryan and Chris Christie, you’re forced to conclude that they do value, and crave, an intellectually muscular candidate who can square off against President Obama. The 2012 election has a fundamentally different temperature from the 2010 one. There’s arguably worse economic uncertainty this time around, greater stakes and a seemingly waning thirst for Tea.

And Republicans appreciate that a presidential race, and the presidency itself, have a higher altitude than a Congressional showdown. Some palpable gray matter really does come in handy. Its presence in Romney, who’s probably brighter than Gingrich in the end, is a principal reason he’s owned, shared or been near the lead since the start.

And while the excessively cerebral posture Gingrich strikes may not be the party ideal, the black-and-white, wrong-and-right conclusions he reaches work just fine.

“I don’t think there’s a de facto anti-intellectualism among Republicans,” said Matthew Dowd, a political strategist who advised, then broke with, George W. Bush. “They just don’t like intellectuals who seem weak and indecisive. They don’t like nuance.” And Gingrich will dumb himself down on demand. He once believed in climate change, and now — abracadabra! — questions it.

OF course it’s possible that the Gingrich surge holds no particular meaning or lessons — that it will turn out to be as transitory as all the others. But things don’t look that way now.

He reminds us more of the Professor Marvel character in The Wizard of Oz: a carnival side-show snake oil salesman who dazzled the crowd with big words and a pompous style who, beneath it all, was as intellectually devoid of depth as the the six-legged sheep. Audiences have always fallen for the charlatans.

It Takes Courage — Steve Benen looks at the claims that President Obama lacks the will to fight for the things he believes in.

There’s ample room for discussion about the merit of the president’s decisions. Obama’s supporters will defend them, and his opponents will condemn them. Fine.

But if we look past that debate, I’m hard pressed to imagine how even the fiercest presidential critics can see him as someone lacking the courage to make tough calls. Health care reform, for example, was put on the national agenda because Obama put it there, despite the risks, and it passed because he stuck with it, even when he was urged to walk away and let the insurance companies win.

It’s not that I think a leader’s bravery and/or courage is irrelevant; it’s that I don’t see how this is a legitimate knock on Obama.

After all, if Mr. Obama, a self-described “skinny black guy with a funny name,” had the courage to run for and win the presidency, the rest is pretty easy.

Dining Out — Why fast food appeals to more than just the poor.

The unpalatable truth is that fast food’s attraction has never really been just about price. For all you hear about the Dollar Menu, a buck at McDonald’s buys a small burger, or small fries, or a small drink — hardly a satisfying meal for most people. As Mark Bittman reported recently in the New York Times, a typical meal for a family of four at McDonald’s in Manhattan costs about $28 — far more than what it would cost to make a healthier meal at home. For someone who’s really pinching pennies, a trip to McDonald’s makes no sense.

What actually drives families to the drive-through are two simple truths. First, it’s convenient. Fast-food hours accommodate odd shifts and offer playrooms to appease screaming children and give moms a break. And, after years of calculated expansion, the restaurants are everywhere we are — in office buildings, department stores, rest stops, schools, Walmarts, airports, even hospitals — which makes fast food America’s default dining-out option. Second, people like the way fast food tastes. No matter how often or how loudly food crusaders preach about the nasty and ecologically disastrous bits that end up in those burgers, fast food’s carefully calibrated mix of salt and fat is hard for many to resist.

Which explains why last night, instead of coming home and making my usual salad and grilling up a chicken breast as I had planned, I swung through BK. It cost $8, but it was there.