If you think we pay a lot of taxes, check out this chart: 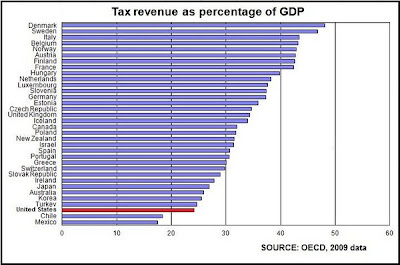 Of the 34 countries in the Organization for Economic Cooperation and Development, only Chile and Mexico impose a lower tax burden than Uncle Sam, according to the latest report from the Paris-based grouping of advanced economies.

As politicians from Washington to Athens spar over how to balance federal budgets, the OECD found that the U.S. collects 24.1 cents in taxes for every dollar of gross domestic product. Mexico’s collects just 17.4 percent of its total economic output in taxes; Chile collects 18.4 percent. The average ratio inched up to 33.8 percent in 2009, the lateste year available.

So the next time you hear some teabagger complaining that they’re “taxed enough already,” tell them to move to Mexico. Maybe they can get a job cutting lawns or picking fruit.

*
Speaking of taxes, the Republicans in the Senate voted to block an extension of the payroll tax cut, effectively raising taxes, which is something that they swore they would never do… unless it was so they could vote against President Obama’s plan. Those folks are programmed to do that: if he’s for it, they’re against it, and vice versa.

So if the president issued a statement strongly opposed to people jumping off a cliff, the entire Republican leadership would be lining up on Fox News to proclaim that it is their God-given right to take a header off Longs Peak. Well, who are we to deny them their rights?