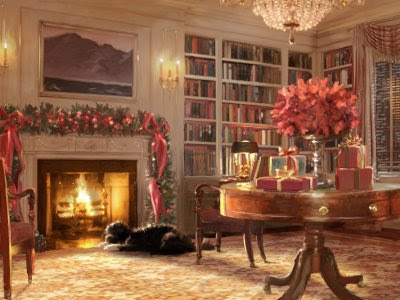 The greeting inside reads, “From our family to yours, may your holidays shine with the light of the season.”

What!? No mention of “Merry Christmas”? No picture of the Baby Jesus or Three Wise Men, or even Santa Claus? This is just more proof that Barack Obama is a secret Muslim Kenyan socialist who is using the official White House card to spread his evil message of sharia and single-payer healthcare. And you can bet that the GOP is furious about it.

Sarah Palin even opined on the issue on Fox.

“It’s odd,” Palin said, wondering why the president’s Christmas card highlights his dog instead of traditions like “family, faith and freedom.”

If she’s upset about that, wait till she sees the ones from George W. Bush and Ronald Reagan.

Yeah, you guessed it. Both Bush and Reagan sent out “holiday” cards with no mention of Christmas or Jesus. So did John F. Kennedy and and Lyndon Johnson. Maybe it’s because they, like most sane people, know that not everyone in America is religious, Christian, or a far-right-wing nitwit.