Not content to just trash Mitt Romney, Newt Gingrich is also going for the bully-as-victim trope again, claiming that anti-Christian bigotry is running rampant through the land.

The challenge we have is anti-Christian bigotry that has forced the Catholic Church to close its adoption service in Massachusetts because it actually wanted to follow the tenets of Christianity. And you look all all around this country and you see again and again, whether its a judge knocking down a cross… I am your President, if you help me win this election, we will not tolerate a speech dictatorship in this country against Christianity.

Yeah, except it’s a crock that the Catholic Church was “forced” to shut down their adoption services in Massachusetts. The law required them to treat all people equally, including gay and lesbian couples, and they didn’t want to comply with the law. 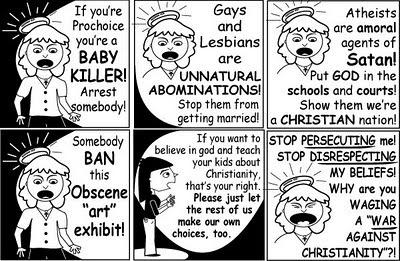