When the Republicans took over Congress last year, one of their little gimmicks was to require that every law proposed cite the specific article in the Constitution that provides the precedent for the new law. Now New Hampshire wants to go them one better. 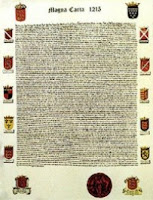 New Hampshire Republicans are taking textual originalism to a whole new level: three lawmakers have proposed a bill that requires that all legislation find its origin not in the U.S. constitution, but an English document crafted in 1215.

When the legislature reconvenes this month, Republicans want their colleagues to justify many new bills with a direct quote from the 800-year-old Magna Carta.

For those of you who last paid attention to feudal English law when you watched Monty Python and the Holy Grail, the good and noble peers of the realm of Newe Hampshyre will now pay heed to the needs of the Welsh (“We shall straightway return the son of Llewelin and all the Welsh hostages”) and shun the usury of the Hebraic lenders: “If anyone who has borrowed a sum of money from Jews dies before the debt has been repaid, his heir shall pay no interest on the debt for so long as he remains under age.”

Sounds like they had their own little banking crisis going on in 13th century London.

I can’t wait to see what their idea of healthcare reform is like: maybe we’ll be able to get leeches without a co-pay.