If you stayed up late to watch the results from the New Hampshire primary, well, then you’re a more devoted political junkie than I am. And if you didn’t, then I’m probably not the first to tell you that Mitt Romney won and Ron Paul came in second. And the candidate who could have provided the toughest run against Barack Obama, Jon Huntsman, is putting the polish on finishing third, saying that third place is his “ticket to ride.”

Charlie Pierce has a great wrap up. 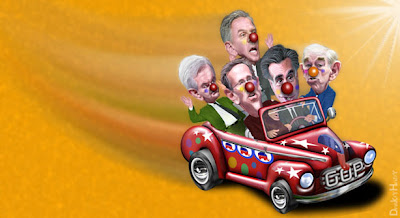 The country’s course through the presidential election of 2012 was decidedly set on Tuesday night. It will be a test of the country’s will. It will be a test of the country’s pride. It will be a test not only of the country’s guts, but also of the country’s capacity to stomach another eight months of preposterous public shamelessness. There is no longer any plausible scenario by which Willard Romney, the Piltdown Man of American politics, will not be the Republican nominee for president of the United States. Which means, among other things, we have nearly a flat year of Willard’s defending his lucrative career as a vulture capitalist and looter of old people’s pensions on the ground that he is a classic American up-from-the-bootstraps success story, and that he is only in this to make sure that other children like him have the opportunity to be born into wealth and make themselves wealthier. The way he’s going — and his staggering recitation of tinpot Reaganite banality after his win here was only the most recent indication of where he’s headed — by the middle of, oh, April, we are going to hear about how Willard was raised a poor black child.

President Obama, Willard told his crowd, is practicing “the bitter politics of envy.” He warned them not to be seduced by the president’s “resentment of success.” It was a moment of almost transcendental meanness and fakery. Willard was explaining to his audience that he was just like them, and that they were the keepers of America’s promise, and that they would continue to be — at least until, for his own profit and that of his wealthy investors, Willard wrecked their companies, stole their retirement, and shipped their jobs to China, never to return. They were all in it together, Willard assured them.

Ross Douthat is looking beyond the winner and beyond the election to the next field of Republican candidates in 2016 and is seeing… Sen. Rand Paul. I think I’ll start looking at property in Nevis right now, just in case.

So now, as upyernoz points out, “we can all go back to thinking that new hampshire is a small relatively insignificant state for another three years.” And the clown car rolls on to South Carolina and then to here, Florida. Oh joy oh rapture.