Florida is the next stop on the clown car that is the GOP nomination.

Benjy Sarlin of TPM reports Mitt Romney unloaded on Newt Gingrich after losing to him in South Carolina.

“We’re not choosing a talk show host, we’re choosing a leader,” Romney said, saying that their nominee should exhibit “integrity,” “sobriety,” and “ethics.”

He called Gingrich a “failed leader” as Speaker who “had to resign in disgrace” and criticized his work as a highly paid consultant for Freddie Mac in his years out of office. “He said he was just a historian there,” Romney said. “I’d like him to release his records there.”

“Tell it it to him in the debates!” one person shouted as Romney began his attack monologue.

“Take the gloves off, Mitt!” another hollered.

Romney drew big applause for his attacks on Obama as well, which mostly stuck to his usual stump speech warning of an “entitlement society” and contained plenty of pointed lines.

“I don’t think he understands the power of free people and free enterprise,” he said. “I think he would change, fundamentally, America.”

Said Romney: “I think it’s time we had someone in the White House who knows how to create jobs because he’s had a job.”

So it turns out that Mitt Romney, when desperate, can dog whistle to the base of the party as well. It’ll be interesting to see if he can maintain that kind of energy of attack for any length of time. After all, he’s been sailing along above the fray for so long, getting his hair mussed in the gutter might come across as phony and contrived. Which, in his case, would be right on track.

There’s going to be yet another debate tonight, this time from Tampa, and we’ll see if what Mr. Romney is doing on the stump translates onto the stage. Newt Gingrich already has that angry white race-baiting schtick going, so now we’re going to see if two can play at that game. Being a pompous demagogue comes naturally to Mr. Gingrich, but I have a hard time believing that Mr. Romney can pull it off without making it look like it’s just another flip-flop on his part. 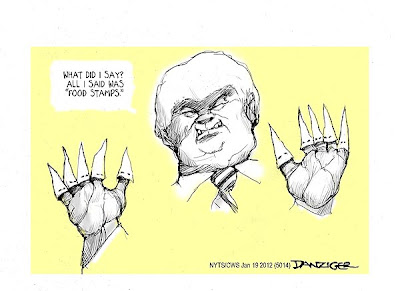 Polls are showing that Newt Gingrich is either neck and neck here with Mr. Romney or Mr. Gingrich running nine points ahead.