The Real Primary — Charlie Pierce on the meaning of the South Carolina primary.

Opinions that are on the fringe everywhere else are in the mainstream here. Issues long since settled are reopened regularly with the prybars of ancient prejudices. (Ron Paul, of all people, comes down here and blames Roe vs. Wade on the 1960’s, and quotes John Adams on why the Beatles sent the country to hell in a bucket. Willard Romney, that old smoothie, yells at a heckler while appearing to be channelling Joe McCarthy.) There is no scar tissue down here, only scabs that open, over and over again.

Now the Republican party must decide going forward if it is going to be defined by the unique circumstances of a South Carolina primary, if it will allow itself to be “disenthralled” from those things that are important to the national governing consensus elsewhere. It must decide if it will be the party of nullification, and not just in the Congress, but in the country as well. Early last evening, David Gregory on NBC speculated that a Gingrich win would prove that Republicans had decided that, “We need a really smart president.”

If the rest of the country starts thinking like this, we might as well give Fort Sumter back. Nobody here is disenthralled, and they are so very proud of it.

The Republican Party has broken out into assholes and shit itself to death.

Etta James — Hilton Als of The New Yorker pays tribute to the lonely sound of the incomparable singer. 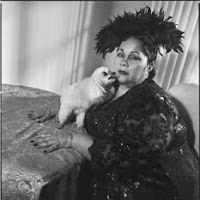 She was an accident, born to a fourteen-year-old black girl in Depression-era Los Angeles. She never knew her father, but thought that he might have been the famous white pool player, Rudolf “Minnesota Fats” Wanderone, whom she met in the nineteen-eighties. Like Marilyn Monroe, that other famous blonde Los Angeleno, James was more or less an orphan, spiritually anyway, abandoned by her mother who ran off to chase men (as a child James called her “the Mystery Lady”) and handed over to a number of caretakers in the meantime. And, again like Monroe, by the time James was a teen-ager, she was filled with ambition and confusion. One played off the other. A foster father would beat her until the girl with the powerful voice sang for his friends. Afterwards, she’d return to her cold, wet bed; James was a bed wetter.

By the time she was a teen-ager, James was reunited, if that is the word, with her mother, who took her to San Francisco, where James’s love of R.&B. saved her, to some extent—but is talent enough if one has been continually unloved by those unreliable specimens, other people? That was what her big sound was about—a deafening cry in the wilderness of her unconquerable loneliness. She was fat: with drugs, food, incredible technical skill. But nothing could fill her up. All she could do was try to expel—shake off—some of the evening’s exertions (looking for dope on a more or less daily basis amounts to a job in itself) in the recording studio, where she sang a kind of speeded up blues, which I do not associate with R.&B. so much as it being just James’s singing, a variation of a sound I’ve heard all my life: black mothers calling down from various tenement windows for their children to come on in and eat their supper, or take some kind of nourishment, emotional and otherwise.

I didn’t realize the extent of James’s gifts as a singularly butch performer until I saw an old YouTube clip of her singing “Precious Lord,” with Chaka Khan and Gladys Knight—a trio so powerful one would be frightened for one’s soul if they weren’t speaking directly about the soul. In it, James lead the choir with a rumble that supported Khan and Knight (particularly Khan) as they rose up to even greater heights of understanding vis-à-vis their respective gifts. As they did so, James stood back, nodding knowingly, a quintessential American artist in that she knew something about loneliness, and, from time to time, what to do with it.

Ian Ford is a friend (and a Friend) that I met through the Quaker meeting in Albuquerque. We’ve kept in touch on and off since I moved away, and today I found out that he writes a blog and has done so for a very long time. (Ian, being the humble and modest Quaker, never told me.) I’d like to share one post called Theater of the Oppressed that I found fascinating.

When I’m near people who are inspired and compassionate, I become more inspired and compassionate. Loose ends get completed; I see beyond immediate setbacks and tend towards health. But when I’m near people who are vain and wandering at a great distance from their souls, I become vain and wander too. This leads me to believe that we are not made to ground ourselves to withstand this world of vanity, and that we need each other to have the strength to do it.

The winds of vanity have carried the autism world (the industry, that is) to such remote realms that I can’t find common vocabulary to even discuss it. When I’m in a classroom, and asked what we should do with an autistic child who is having a tantrum, I’m at a loss for words; I’ve lost my ground. Somewhere inside, I know that I know a good answer, but it is blocked. I suggest consoling him or giving him time alone (or whatever trite thing that comes to mind), but what I really mean is the situation is absurd: why is controlling this child so urgent in the first place? I find myself so unglued from home, and so lonely when I’m surrounded by people churning up this hurricane of “help”. I’m pretty sure that it is the energy of vanity that drives the idea that We Must Do Something. Yet I’m caught like Dorothy and as I said in a poem once, my guideposts have all blown over in a storm. When I have no ally in the sea of vanity, I make no sense; I am ineffective, disabled.

I always liked theater – the unbounded space for creativity, the games, and the way it creates equality. So I’m naturally attracted to the idea of autism theater, which is a Big New Thing (try a web search if you like). However, I was immediately lost in it, just like in the classrooms – both in reading about it and in participating in a some programs. I couldn’t identify the inspiration, direction or reason for it, other than as a form of Behavior Therapy, may god save us from that. Then I read from Augusto Boal (author of Theater of the Oppressed), how theater is the grounding for turning awareness of ones own oppression into action. In his work, theater is the initiating action that leads to action outside the theater.

The games that Boal explains (he has hundreds of them) have seeped into many other people’s repertoire of games, but they can be twisted to suit any other agenda. In the extreme, a game whose original reason for being was to connect people together to empower them to take autonomous control of their lives could be twisted into a game of controlling the behavior of a disabled class! The irony of that had been festering without my conscious awareness. Now I at least have Boal as an inspirational ally, to help me find vocabulary when I’m swept into those distant realms.

Interestingly, the person who lent me the book volunteered that he could find no connection between the concepts of Theater of the Oppressed and working with autistic actors! Privilege dulls our minds.