Rick Santorum claims that the he’s the real science guy when it comes to climate change. 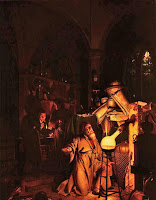 “It’s so funny that this party that criticizes the right for being anti-science, but when it comes to the management of the Earth, they are the anti-science ones!” the candidate declared. “We’re the ones who stand for science and technology and using the resources we have to make sure we have a quality of life in this country and maintain a good and stable environment.”

Apparently he was serious. Yes, the man who insists that intelligent design is a legitimate scientific theory and should be taught in high schools is the one who stands for science and the liberals are all believers in junk theories that have no basis in fact or provability.

He also thinks that environmental protection should be left to state and local government because, as Digby notes, “After all, the air and the water are all confined within the arbitrary lines on the 50 state maps. In fact, they’re confined to the arbitrary lines on the maps of each individual town, village and home. If your little berg wants to belch smoke into the air 24/7 it’s none of my bidness. And there’s no reason for you to be involved if I dump raw sewage into the river that runs through mine.”

Painting of The Alchemist by Joseph Wright, 1771.