Charlie Pierce notes that the grassroots is growing the next crop of wingnuts. 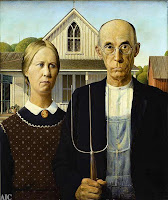 I hate to keep harping on this, but what you’re seeing in the state legislatures is the activity of the Republican farm team. The people voting for laws springing from the mushy brains of people like Bob Marshall and Lori Klein are the young Republicans who, a few cycles from now, will be running for Congress, probably from safe Republican districts that they’ve helped draw up, and aided immeasurably by voter-suppression laws that they’ve helped pass. Most of them will be the products of the vast conservative candidate manufacturing base — the kids at CPAC, the College Republicans, the various Christianist organization. They will not equivocate. They will not moderate. And they are the future of the party. Anyone who thinks the Republican party eventually again will have to “move to the middle” (this translates from the Punditese to “regain its sanity”) isn’t paying attention. In 2006, the Republicans were handed a defeat every bit as epic as any one ever handed to the Democrats. They did not pause to give it a second thought. Their resolve hardened. They ran what few “moderates” were left right out of the party. And, in 2010, they got a wave election that not only gained them the House of Representativse, but also the legislative majorities in the states that are now producing these goofy-ass laws, and a lot more seriously dangerous ones as well. And, even then, they blew a chance to retake the Senate by running sideshow freaks like Sharron Angle and Christine O’Donnell. They didn’t care.

They do not stop, even when they’re losing. The country told them, through the 1998 midterms, that it didn’t want Bill Clinton impeached. Bill Clinton got impeached. In 2005, everybody including their Democratic colleagues told them that they were going off the cliff in their meddling in the life and death of Terri Schiavo. There were gobs of polling data to back them up. The Republicans kept meddling even after Ms. Schiavo passed.Is there any evidence that the Republicans are moving “toward the middle” in their presidential contest? Ask poor Willard Romney if that’s the case. The current frontrunner is a nutball ultramontane Catholic who lost his last race by 18 points, at least in part because he was one of the more noxious of the Schiavo meddlers.

The fact is that the presidency is not really that important to them. They have found a way to make it impossible for any Democratic president to govern as a Democrat. Their real goal is in the legislatures, federal and state, where they have been able to exercise their power on the issues they care about. They will not change themselves. They are going to have to have the wingnut flogged out of them over several losing election cycles, and they’ve arranged things in the states so that may not be possible. The president should not be talking about “Congress” and “Washington,” and expect the country to clue in that he’s nudging and winking in code about the Republicans. He should make it clear that one of our two major political parties is now an extremist party from its lowest levels to its highest echelons. This should be an issue in the campaign as imporant as income inequality or campaign finance, but it won’t be. Barack Obama’s just not built that way. And, out in the states, things are getting crazier by the day. In Virginia, by the way, Bob Marshall’s running for the U.S.Senate in 2012. In any party that was halfway sane, they’d have sedated him by now.

Not one step backwards.

Stalin would have loved these guys.

This has been going on for a long time; it’s been part of the American fabric since before we were a nation. This latest iteration started back in the 1980’s when Jerry Falwell and Pat Robertson stirred up their minions and founded the Moral Majority (wishful thinking on both parts). They started out with school boards and city councils, moving up to the state house as the election cycles went on. They didn’t have to run for Congress; they could work their ways in Lincoln and Jefferson City and Tallahassee, and occasionally they’d send one of their own on to the big leagues; Marco Rubio did not just step off the boat from Cuba and become the darling of the right wing as the Senator from Florida. His backstory in Florida politics is a textbook guide to how the system works. But more often than not, that’s a rare occurrence; the ratio of the wingnuts making in the big city is roughly the same as the high school hero of the football team making it in the NFL or the 4H talent show star making it on Broadway. But that doesn’t stop the Tim Tebows or the Justin Biebers from dreaming of it (and explains American Idol).

To their credit — and our peril — they have figured out how to make it work on the state level. So they stir up trouble in Tallahassee and Columbus, convinced that they can change the culture through the statehouse. (Until it comes to things they don’t like such as marriage equality. Suddenly they become federalists. Funny how that works.) And they don’t give up. As Geov Parrish notes at Booman Tribune, losing elections only convinces them that they didn’t run candidates that were conservative enough.