Post This — Jen Doll on how the internet has changed the Culture War.

Even if some Republicans desperately would like to return to another era (and some, arguably, haven’t changed much in their attitudes since that time), the way in which we’re having these discussions — on blogs, on Twitter, on our Facebook pages, and in an overwhelmingly participatory, everyone-has-a-voice fashion — has changed the political and social landscape forever. As much as we bemoan the state of things today (and there’s no denying that certain attitudes are not only old-fashioned but downright archaic and dangerous), we have to acknowledge that we’re in an unprecedented time for change. One thing the Internet is very, very good at is existing as a place where the self-righteous, the inauthentic, or the blatantly ridiculous can be brought to a kind of public justice — shamed, held accountable, debated, made to explain. The Internet catalyzes backlash. And we keep seeing the Internet get results.

The recent examples of such Internet wins, righting the tasteless jokes and PR injustices; taking one person or group to task and punishing them for their mistake, all seem to involve short skirmishes rather than full-out wars, though. Maybe it’s the attention span of the Internet, or the 24-hour news cycle — maybe this war will actually happen in short, bitty bursts online as opposed to the drawn-out physical campaigns of old. Or maybe this isn’t a war at all. Maybe we’re just living in a particularly fraught time because we sit on the precipice of great change.

Either way, it seems as though she who uses the Internet best will have a distinct and unprecedented advantage in the ongoing battle. And the more retrograde conservatives get, the stronger the foundation, mobilization, and mass of any counter-argument. Practically speaking, as Evan McMorris-Santoro writes in TPM, “This could be a big problem for the GOP when the calendar reaches November.”

Thank the 21st century for that.

Paul Krugman on why people most likely to vote against social programs are the ones who are using them the most.

Modern Republicans are very, very conservative; you might even (if you were Mitt Romney) say, severely conservative. Political scientists who use Congressional votes to measure such things find that the current G.O.P. majority is the most conservative since 1879, which is as far back as their estimates go.

And what these severe conservatives hate, above all, is reliance on government programs. Rick Santorum declares that President Obama is getting America hooked on “the narcotic of dependency.” Mr. Romney warns that government programs “foster passivity and sloth.” Representative Paul Ryan, the chairman of the House Budget Committee, requires that staffers read Ayn Rand’s “Atlas Shrugged,” in which heroic capitalists struggle against the “moochers” trying to steal their totally deserved wealth, a struggle the heroes win by withdrawing their productive effort and giving interminable speeches.

Many readers of The Times were, therefore, surprised to learn, from an excellent article published last weekend, that the regions of America most hooked on Mr. Santorum’s narcotic — the regions in which government programs account for the largest share of personal income — are precisely the regions electing those severe conservatives. Wasn’t Red America supposed to be the land of traditional values, where people don’t eat Thai food and don’t rely on handouts?

[V]oters imagine that pledges to slash government spending mean cutting programs for the idle poor, not things they themselves count on. And this is a confusion politicians deliberately encourage. For example, when Mr. Romney responded to the new Obama budget, he condemned Mr. Obama for not taking on entitlement spending — and, in the very next breath, attacked him for cutting Medicare.

The truth, of course, is that the vast bulk of entitlement spending goes to the elderly, the disabled, and working families, so any significant cuts would have to fall largely on people who believe that they don’t use any government program.

The message I take from all this is that pundits who describe America as a fundamentally conservative country are wrong. Yes, voters sent some severe conservatives to Washington. But those voters would be both shocked and angry if such politicians actually imposed their small-government agenda. 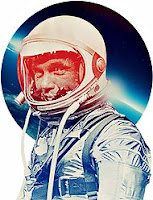 Americans had yet to recover from the Soviet Union’s launching of the first spacecraft, Sputnik, in October 1957 — a rude jolt to our confidence as world leaders in all things technological. The space race was on.

Soon after he took office in 1961, President John F. Kennedy had thrown down the challenge to send men to the Moon by the end of the decade. But the Russians still set the pace, boastfully. They launched a dog into orbit, then the first man, Yuri A. Gagarin, and another, Gherman S. Titov.

Then, on Feb. 20, 1962 — 50 years ago next Monday — a Marine Corps fighter pilot from small-town America stepped forward in response to the country’s need. The astronaut was John Glenn, whom the author Tom Wolfe has called “the last true national hero America has ever had.”

Squeezed into the cockpit of a Mercury spacecraft called Friendship 7, launched by an Atlas rocket from Cape Canaveral, Fla., Mr. Glenn circled the Earth three times, becoming the first American to orbit the planet. Perhaps no other spaceflight — all 4 hours, 55 minutes and 23 seconds of it — has been followed by so many with such paralyzing apprehension.

Mr. Glenn saw three sunsets and sunrises that Tuesday, from a maximum altitude of 162 miles. At each sunrise, an explosion of what looked like fireflies appeared outside the window, mystifying him. Then came a signal of a suspected problem that had ground controllers bracing for an uncertain, possibly catastrophic re-entry into the atmosphere.

The ending was a happy one. A collective sigh of relief was heard across the land. The president rushed off to Cape Canaveral to hail the returning hero. Bands played. Ticker tape streamed from the high windows of Broadway. People cried. Never mind that a Soviet cosmonaut had already spent 25 hours in orbit. As Mr. Wolfe has written, “John Glenn made us whole again!”

Doonesbury — What’s in a word?