Leave it to the Republicans to hold a hearing on birth control policy with only men testifying. 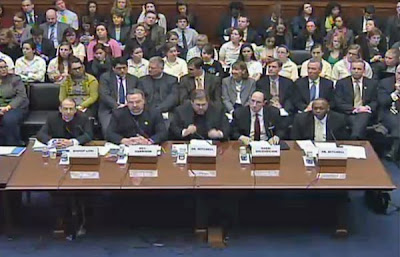 Democrats tore into House Oversight Committee Chairman Rep. Darrell Issa (R-CA) for preventing women from testifying before a hearing examining the Obama administration’s new regulation requiring employers and insurers to provide contraception coverage to their employees. Republicans oppose the administration’s rule and have sponsored legislation that would allow employers to limit the availability of birth control to women.

Ranking committee member Elijah Cummings (D-MD) had asked Issa to include a female witness at the hearing, but the Chairman refused, arguing that “As the hearing is not about reproductive rights and contraception but instead about the Administration’s actions as they relate to freedom of religion and conscience, he believes that Ms. Fluke is not an appropriate witness.”

That’s because we all know that women don’t have views on the freedom of religion and conscience.

The women members of the committee walked out.

Photo from Echidne via Shakesville.