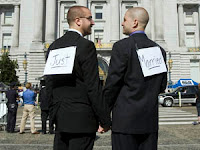 The Washington state Senate, in an historic action, voted 28 to 21 on Wednesday night to legalize marriage between same-sex partners.

“We ask for your support tonight because marriage is the way society says you are family,” said state Sen. Ed Murray, D-Seattle, chief sponsor of the legislation and a gay man in a two-decade partnership.

Regardless of how his colleagues voted, Murray added, they will receive a wedding invite from him. A practicing Catholic, Murray has said he is pained that he will not be able to marry in his church.

The House of Representatives is expected to approve the legislation within a week. Gov. Chris Gregoire, who watched Wednesday night’s debate, has become a passionate advocate of marriage equality at the end of what she described as a “personal journey.”

The bill passed with support from 24 Democrats and four Republicans. Eighteen Republicans and a trio of Democrats — State Sens. Jim Hargrove, Tim Sheldon and Paull Shinn — voted no.