Well, it was fun while it lasted. 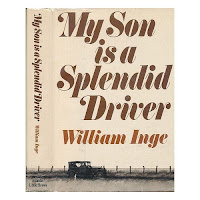 I actually did accomplish some things. I got the book I needed for research on my paper for the scholar’s conference: a first edition of My Son is a Splendid Driver, by William Inge. Written in 1971 (two years before his death by suicide), it is Inge’s thinly-veiled autobiography of growing up in the early part of the 20th century in rural Kansas. It provides a great deal of insight into his life and his views on family, faith, and how he came to put them into his plays. It’s been a huge help in forming the context of my paper, and it’s a great read.

I also got in some good relaxation and actually did some housekeeping. I know; you should do it every six months whether it needs it or not. I also reconnected with some friends, went to a couple of car shows, and actually enjoyed waking up, rolling over, and going back to sleep. You should try it some time.

And with that, we’re back on our regular schedule, such as it is, just in time for more fun with the candidates, the bean-brains of the Orcosphere, the vernal equinox, my brother’s birthday, and whatever other nonsense we can stir up.