If Super Tuesday was supposed to the day that Mitt Romney wrapped it up, that didn’t exactly happen. But he didn’t get his head handed to him either; he pulled off a very narrow win in Ohio, and took the states where he was expected to win: Massachusetts, his latest home state and where he was once governor; Vermont (they have Republicans in Vermont? Who knew?); and Virginia, where the only other candidate on the ballot was Ron Paul. Oh, and he won in Idaho and Alaska despite Sarah Palin voting for Newt Gingrich. 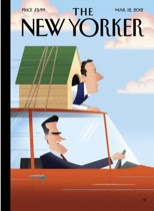 Rick Santorum won in the bible belt primary states of Tennessee and Oklahoma, and also added North Dakota, where it’s cold this time of year.

Newt Gingrich’s only win came in his home state of Georgia, but he’s still sure he can pull it off if only the “media elites” would leave him alone. (Is he kidding? The only reason he’s not selling real estate in Tarzana is because the media elites pay him any attention.) And Ron Paul is still chugging away winless, kind of like one of those Japanese soldiers who were left on an island in the Pacific and thought the war was still going on in 1971.

In other primary results of note, Rep. Dennis Kucinich (D-OH) lost in the battle for the redistricted 9th against Rep. Marcy Kaptur of Toledo. She will face off against Samuel J. Wurzelbacher — “Joe the Plumber” — in November. Fun times. Also in Ohio, Rep. Jean Schmidt (R-OH), the prototype of Michele Bachmann, lost her seat to newcomer Brad Westrup, an Army combat surgeon, who is even more right-wing than she is.

So while the Romney camp can breathe a little easier this morning, it’s still got a long and bumpy road ahead, so they’d better tie down the doghouse on the top of the station wagon. I still think he will win the nomination, but by the time he gets to Tampa for the convention, he’s going to be so beat up by his own party that it will be hard to tell him from an underdone steak. The bad blood between the candidates is more than just your typical campaign rivalries. Newt Gingrich is famous for carrying petulant grudges — remember him shutting down the government because he had to fly coach on Air Force One in 1995? And Rick Santorum’s apocalyptic vision of a world filled with rampant gay marriage and people enjoying sex won’t go away just for the sake of party unity.

The upcoming calendar, where states like Alabama and Mississippi will vote, is not going to be kind to Mr. Romney. The cable news pundits label the Republican voters in those states as “the base”; blue collar, less educated, more religious. In other words, right wing religious fanatics who refrain from using the n-word because they can’t spell it on their posters. And as long as the sugar daddies with the SuperPacs keep pumping money into the moribund corpses of campaigns that should have gone into the light months ago, the slog will go on.

It ain’t over yet.