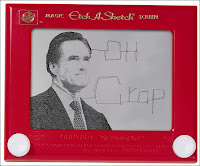 I don’t know if I can come up with some clever way of working the Etch-A-Sketch into a post about the gaffe made by Eric Fehrnstrom, the unfortunate Romney aide who drew the straw to go on CNN yesterday morning and explain how Mitt Romney will pivot to sell himself to the general electorate after having to suck up to the right-wing base to win the primary. By now everyone else — including the other candidates in the race — has already done that.

Democrats trumpeted the interview as an outright admission that Romney plans to abandon his more conservative positions as soon as the primary ends and adopt the moderate persona that brought him to prominence as governor of Massachusetts.

What is actually more interesting than the gaffe itself is that it is part of a pattern that the Romney campaign goes through: win a primary, step on it with a faux-pas. It’s practically Freudian, as if the campaign itself doesn’t want to really win so they make these unforced errors to keep the primaries going and keep the bloggers busy.

Mr. Fehrnstrom’s moment of candor also points out the obvious: Mitt Romney and telling the truth are not on the best of terms. Or, to put it simply, he lies. A lot. We’re not talking about taking things out of context and using them to in an ad; that’s part of the business. We’re talking about stating something that is demonstrably false and saying it’s the truth. There’s a whole list of lies that Mr. Romney has told on the campaign trail, and they’re not just exaggerations, stretches, or “reasonable people may disagree” discussions. They’re utter bunkum, balderdash and bullshit. Rachel Maddow had a segment last night that is well worth the fifteen minutes that it takes to watch it:

Visit msnbc.com for breaking news, world news, and news about the economy

Today — if not sooner — the Romney campaign will come out with some mushy explanation about how every campaign goes through changes as it switches from the primary to the general election, blah blah blah, let’s move on. (Just curious; I wonder what Mr. Fehrnstrom’s future will be with the campaign. They can’t fire him; that would be an admission that what he said it was a huge gaffe. But they can’t have him going on TV and saying whatever pops into his mind. My guess is that he’ll spend more time in the back office before deciding to spend more time with his family.)

Yeah, but I don’t think this is going to be a one-day news cycle story. Unlike the object of comparison, you can’t just shake it up and start over.

(PS: It was only a matter of time before this came along.)

[Photo via The Maddow Blog.]