Race to the Bottom — Charles Blow of the New York Times looks at the case of Trayvon Martin, a young black man shot and killed by an Hispanic security guard in Sanford, Florida, and the echoes of history and reality for race relations in America.

As the father of two black teenage boys, this case hits close to home. This is the fear that seizes me whenever my boys are out in the world: that a man with a gun and an itchy finger will find them “suspicious.” That passions may run hot and blood run cold. That it might all end with a hole in their chest and hole in my heart. That the law might prove insufficient to salve my loss.

That is the burden of black boys in America and the people that love them: running the risk of being descended upon in the dark and caught in the cross-hairs of someone who crosses the line.

The racial sensitivity of this case is heavy. Trayvon’s parents have said their son was murdered. Crump, the family’s lawyer, told me, “You know, if Trayvon would have been the triggerman, it’s nothing Trayvon Martin could have said to keep police from arresting him Day 1, Hour 1.” Even the police chief recognizes this reality, even while disputing claims of racial bias in the investigation: “Our investigation is color blind and based on the facts and circumstances, not color. I know I can say that until I am blue in the face, but, as a white man in a uniform, I know it doesn’t mean anything to anybody.”

Zimmerman has not released a statement, but his father delivered a one-page letter to The Orlando Sentinel on Thursday. According to the newspaper, the statement said that Zimmerman is “Hispanic and grew up in a multiracial family.” The paper quotes the letter as reading, “He would be the last to discriminate for any reason whatsoever” and continues, “The media portrayal of George as a racist could not be further from the truth.” And disclosures made since the shooting complicate people’s perception of fairness in the case.

Although we must wait to get the results from all the investigations into Trayvon’s killing, it is clear that it is a tragedy. If no wrongdoing of any sort is ascribed to the incident, it will be an even greater tragedy.

One of the witnesses was a 13-year-old black boy who recorded a video for The Orlando Sentinel recounting what he saw. The boy is wearing a striped polo shirt, holding a microphone, speaking low and deliberately and has the heavy look of worry and sadness in his eyes. He describes hearing screaming, seeing someone on the ground and hearing gunshots. The video ends with the boy saying, “I just think that sometimes people get stereotyped, and I fit into the stereotype as the person who got shot.”

And that is the burden of black boys, and this case can either ease or exacerbate it.

Pushing Daiseys — James Fallows on the scandal of the fictionalized story by Mike Daisey about Apple in China that led This American Life to retract the January 6, 2012 episode of the series.

If he had even once said that he was presenting a polemic, a metaphor, a dramatization, an “inspired by real events” monologue rather than real “facts,” no one could ever have complained. Do we care whether Harriet Beecher Stowe ever saw runaway slaves jumping on ice floes as they fled across a river? (Stowe described Uncle Tom’s Cabin as a “series of sketches” conveying the cruelty of slavery.) Do we care whether Upton Sinclair had actually seen the packinghouse cruelties he described in The Jungle? Whether any family exactly like the Joads was known to John Steinbeck — or exactly like George Bailey’s or Mr. Potter to Frank Capra for It’s a Wonderful Life? Charles Dickens and Oliver Twist? You get the point. Mike Daisey could have had 98% of the intellectual/social impact of his monologue, and zero % of the dishonesty and now disgrace, if he had described it as an attempt to convey the truth of a situation through imagined details.

Long Distance Driving — 200,000 miles on an odometer is no longer unusual. 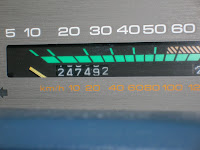 In the 1960s and ’70s, when odometers typically registered no more than 99,999 miles before returning to all zeros, the idea of keeping a car for more than 100,000 miles was the automotive equivalent of driving on thin ice. You could try it, but you’d better be prepared to swim.

But today, as more owners drive their vehicles farther, some are learning that the imagined limits of vehicular endurance may not be real limits at all. Several factors have aligned to make pushing a car farther much more realistic.

Cars that have survived for a million miles or more have been widely documented, of course, but those tend to be exceptional cases. What’s different, and far more common, today are the online classified ads offering secondhand Hondas, Toyotas and Volvos with 150,000 or 200,000 miles — or more — not as parts donors but as vehicles with some useful life left.

One driver who has firsthand experience with this new paradigm of durability is Mark Webber, a 57-year-old Porsche salesman.

Mr. Webber has a full grasp of powerful new sports cars — in January he was in Southern California for sales training and track time with the 2013 Porsche 911 — but for his 35-mile commute to Herb Chambers Porsche in Boston, from Scituate, Mass., he drives a 1990 Volvo 740 with over 300,000 miles.

“I just can’t see the point of spending a lot of money driving a newer, racier car every day in city traffic when my old Volvo just wants to keep on going,” Mr. Webber said. “I guess you could say I’m just a New England tightwad.”

In Mr. Webber’s case, the enabler of his thrift may be global competition — and the Environmental Protection Agency.

Customer satisfaction surveys show cars having fewer and fewer problems with each passing year. Much of this improvement is a result of intense global competition — a carmaker simply can’t allow its products to leak oil, break down or wear out prematurely.

But another, less obvious factor has been the government-mandated push for lower emissions.

“The California Air Resources Board and the E.P.A. have been very focused on making sure that catalytic converters perform within 96 percent of their original capability at 100,000 miles,” said Jagadish Sorab, technical leader for engine design at Ford Motor. “Because of this, we needed to reduce the amount of oil being used by the engine to reduce the oil reaching the catalysts.

“Fifteen years ago, piston rings would show perhaps 50 microns of wear over the useful life of a vehicle,” Mr. Sorab said, referring to the engine part responsible for sealing combustion in the cylinder. “Today, it is less than 10 microns. As a benchmark, a human hair is 200 microns thick.

Doonesbury — With or without prejudice.