The other night Bob and I were driving to a meeting and discussing the GOP primaries and wondering, now that they’ve gone after immigrants, birth control, and women in general, what would be the next item up for bids on The Vice Is Right?

The Obama Administration has turned a blind eye to those who wish to preserve our culture from the scourge of pornography and has refused to enforce obscenity laws. While the Obama Department of Justice seems to favor pornographers over children and families, that will change under a Santorum Administration.

I proudly support the efforts of the War on Illegal Pornography Coalition that has tirelessly fought to get federal obscenity laws enforced. That coalition is composed of 120 national, state, and local groups, including Morality in Media, Family Research Council, Focus on the Family, American Family Association, Cornerstone Family Council of New Hampshire, Pennsylvania Family Institute, Concerned Women for America, The Ethics & Religious Liberty Commission of the Southern Baptist Convention, and a host of other groups. Together we will prevail.

I am not the only one, I hope, that finds it ironic that the candidate who proudly proclaims his righteousness as embedded in the teachings of the Catholic Church as the one to be against child molestation.

And I think that pitch is going to be a hard sell (no pun intended) in a state that Mr. Santorum just won in a primary, as Wonkette notes.

This website called Calamities of Nature produced a wonderful chart that everybody should hang up on the wall in Mississippi, based on Google search data. 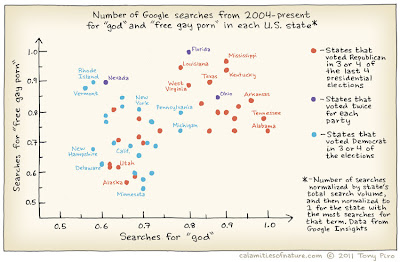