Mitt Romney on the Chevy Volt:

I’m not sure America was ready for the Chevy Volt. I mean, I hope it does well, I don’t want to disparage any product coming out of Detroit. But I think instead of having politicians tell us what kind of cars we ought to make, we ought to let the people who are trying to understand the market make that decision.

March was the best month yet for G.M.’s plug-in hybrid, the Chevrolet Volt, which posted sales of 2,289, doubling its February results. Nearly all of G.M.’s other high-mileage vehicles were gas-powered models, which have become considerably more efficient in recent years.

Perhaps Mr. Romney can be forgiven for his lack of knowledge of what cars we ought to make. His father was once the president of the company that gave us the AMC Pacer, a vehicle once described by a critic as a “turd on wheels.” 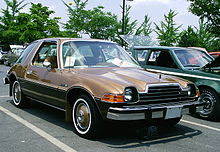