Apparently some in the foreign press think it’s undignified for the Secretary of State to get out and enjoy herself. 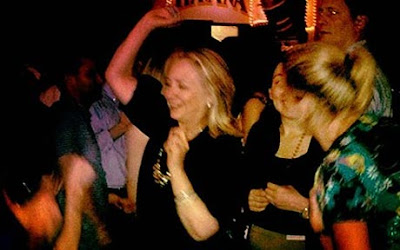 The pictures of Hillary Clinton dancing the night away in Colombia during the Summit of the Americas are now all over Twitter, and were first reported by ABC News:

Secretary of State Hillary Clinton kicked back Saturday night, dancing and drinking beer at a local hotspot after a day of summit meetings in Cartagena.

The AFP/Getty got images of the Secretary dancing at Café Havana with her hands up in the air and swigging a local brew with friends.

Clinton and President Obama are spending the weekend in the resort town for the Summit of the Americas, along with the leaders of 33 Latin American countries.

The overwhelmingly liberal US media is treating the story as a bit of fun, with the usually austere Mrs Clinton seen as letting her hair down. But I suspect that a lot of US taxpayers will see it differently – as a senior government official having a jolly time on an official overseas junket at taxpayers’ expense. And this was hardly a display of good judgment at a time when nearly 13 million Americans are unemployed, and US soldiers are laying their lives on the line every day in Afghanistan. In an effortless display of leading from behind, Hillary was partying in Colombia while the Taliban were about to launch a wave of terror attacks in Kabul.

It is hard to imagine Condoleezza Rice, Colin Powell, Madeleine Albright or Henry Kissinger “livin’ la vida loca” on the world stage. This was less an example of “smart power” than a boozy nightclub audition for the sixth season of Jersey Shore. Hillary Clinton’s Colombian antics are an embarrassment for a high-level cabinet member on official duty, and have lowered the office of Secretary of State. Not exactly the sort of image the federal government should be projecting at a time of widespread public disillusionment with Washington excesses.

First, “the overwhelmingly liberal US media”… zuh? Second, if “it is hard to imagine Condoleezza Rice [or] Colin Powell” getting down with their bad selves, well…


and then there’s this…
and finally…
Shut up and dance.