Newsweek is out (no pun intended) with a cover photo and essay by Andrew Sullivan that dubs President Obama as the “first gay president.” 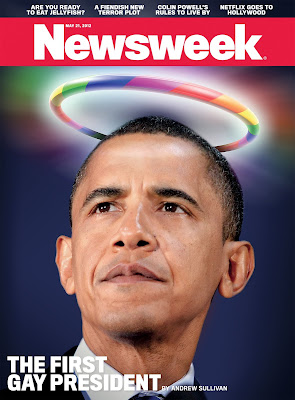 Both Newsweek and Mr. Sullivan are shorthanding the president’s support of same-sex marriage by labeling him as gay. Except I’m not comfortable with the label — not that there’s anything wrong with it — and the idea that supporting same-sex marriage and other civil rights for the LGBTQ community makes him gay. If that’s the case, my parents and a lot of my family members are gay, too, which would come as a surprise to them and their respective children and spouses. It would also apply to a number of people I know who are demonstrably straight. It’s catchy, it sells magazines, and I’m sure the editors of Newsweek felt they had to come up with something to counter last week’s Time magazine cover article on breastfeeding. (Oh, please, don’t even go there.)

Contrast that with The New Yorker‘s cover and Margaret Talbot’s comments on civil rights and their evolution, so to speak, throughout recent history and how both presidents and our society dealt with them.

One day, not long from now, it will be hard to remember what worried people so much about gay and lesbian couples committing themselves to marriage. And, when that day comes, President Obama’s remarks last week about how, “personally,” it was “important for me to go ahead and affirm that I think same-sex couples should be able to get married” will seem mild and obvious. That is not to diminish the importance of his statement. It’s just to note that same-sex marriage is a historical inevitability—and what people say about it now, for and against, will be seen in that light.

Don’t get me wrong; I am very, very glad that President Obama has come to this point. I grant that it was not an easy thing to do and that he may have struggled with it over the years… or at least since he supported same-sex marriage when he was in the Illinois state house. But I agree with my cohort, Michael J.W. Stickings:

And now Obama is supposedly the first gay president? Why? For being behind the curve (and behind his own administration, including Vice President Biden, of course) on a basic civil rights issue, and for finally announcing his support for same-sex marriage only after most of the rest of the country, according to polls, had come to the same conclusion, and for doing so because he needed to fire up the base, not to mention his big-time donors?

Call me cynical, but this doesn’t make Obama gay, it just proves he’s a smart politician who may have had generally progressive views on gay rights all along but who obviously allowed political considerations to get in the way of doing what was right.

Newsweek is bumpersticker journalism; something it has increasingly indulged in over the last decade or so, and one of the reasons I let my subscription expire. If I wanted to read that sort of stuff, I’d pick up a copy of People.

[Edited for clarity after posting.]