Barack Obama has been on a huge spending spree, right? Wrong.

Almost everyone believes that Obama has presided over a massive increase in federal spending, an “inferno” of spending that threatens our jobs, our businesses and our children’s future. Even Democrats seem to think it’s true.
Government spending under Obama, including his signature stimulus bill, is rising at a 1.4% annualized pace — slower than at any time in nearly 60 years.

But it didn’t happen. Although there was a big stimulus bill under Obama, federal spending is rising at the slowest pace since Dwight Eisenhower brought the Korean War to an end in the 1950s.

Even hapless Herbert Hoover managed to increase spending more than Obama has. 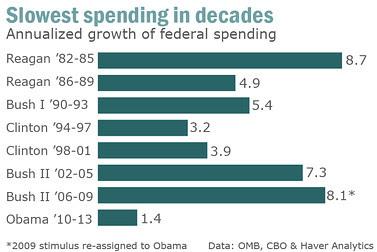 Just more proof that Barack Obama is no Ronald Reagan.