The New Yorker: The Spectrum of Light by Bob Staake. 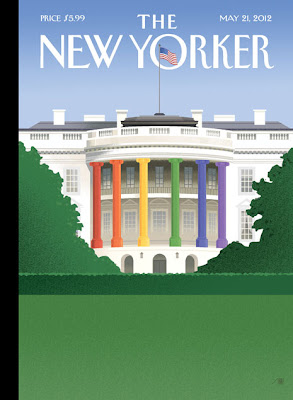 Memories of Boarding School — Edmund White preceded Mitt Romney at Cranbrook and remembers his own years there.

For me, Cranbrook was a lonely place, and I was definitely a sort of geek. I didn’t play sports, so important at school, and my grades were suspiciously and effortlessly high (that was the era of the “gentleman’s C”). I already knew I wanted to be a novelist and had written two novels by the time I was graduated; I was tormented by my homosexuality and was a patient of an eccentric shrink in nearby Birmingham, who vowed to turn me straight. The school allowed me to slip away twice a week, but it kept the secret that I was seeing a psychoanalyst. Once I ran into one of my teachers in the waiting room.

From what I can gather from the few details that have come out about Romney and his bullying of a student who was perceived as gay (forcefully cutting off his long, bleached-blond hair), a familiar picture emerges. Romney was not a good student nor was he athletic; he was the manager of one of the school teams, a sort of default position for boys who wanted to be athletic and cool and popular—a water boy, in essence. He was considered a class clown, always up to rather cruel pranks. I can picture his situation, though it’s only speculation on my part (I’ve never known any of his friends, though one of his older brothers was a classmate). On the one hand he had an embarrassingly famous father, the governor of Michigan, whom he idolized as the youngest child. On the other he was the sole Mormon, a member of what was definitely seen as a creepy, stigmatized cult in that world of bland Episcopalian Wasps (we had Episcopalian services at chapel three mornings a week). When his father was president of American Motors, he lived at home and was a day student, an envied status. When his father was elected governor and moved to the state capital of Lansing, he became a boarder. Suddenly he was surrounded by other Cranbrook students and the strict “masters,” 24/7. He no longer had the constant support of his tight-knit family. Now he had to win approval from the other boys.

No wonder he became a daring and even violent prankster. He who worried about his own marginal status couldn’t bear the presence of an unapologetic sissy like Lauber, with his long bleached hair (the Mormons, then as now, have insisted on a neat, traditional, conservative appearance, especially in their young missionary men whom they send out all over the world). In scorning and shearing a sissy student and leading a gang of five other boys in this “prank,” Romney may have felt popular and in the right for the first time.

Who would have thought that in 2012, we would be debating a woman’s access to contraception? Or re-litigating the merits of the Civil Rights Act? Or fighting to prevent a key provision of the Voting Rights Act from being repealed?

In B-Movie, his scalpel-sharp skewering of the Reagan revolution, the late, great Gil Scott-Heron derided what he saw as a tendency “not to face now or tomorrow, but to face backwards.” That song was released in 1981, and the tendency has only grown more pronounced since then.

Some of us strain toward a mythic past of perceived tranquility and stark moral choices when, to quote Scott-Heron again, “movies were in black and white and so was everything else” — in other words, the proverbial “good old days.” They don’t seem to know — more likely, they just don’t care — that some of us never had good old days.

For the nation’s gay and lesbian citizens, this is as close to good old days as they have ever come. And the idea that they can be turned back from the threshold of freedom by a state constitutional amendment or by 50 state constitutional amendments misreads human nature. You will as easily return women to the kitchen as you will return gay people to the closet, to the days when their sexual orientation was regarded as both a mental disorder and an indictable crime.

Let those who need to do so finally get it through their heads that gay people are not going to go back there — would you? The president has embraced this. By contrast, North Carolina embraces only the stubborn intransigence of those who desperately need to wake up and smell the 21st century.

Rust Belt Revival — Will Doig at Salon.com looks at the cities in the Midwest that are coming back.

More than any other city in America, Cleveland is a joke, a whipping boy of Johnny Carson monologues and Hollywood’s official set for films about comic mediocrity.

But here’s what else is funny: According to a recent analysis, the population of downtown Cleveland is surging, doubling in the past 20 years. What’s more, the majority of the growth occurred in the 22-to-34-year-old demo, those coveted “knowledge economy” workers for whom every city is competing. Pittsburgh, too, has unexpectedly reversed its out-migration of young people. The number of 18-to-24-year-olds was declining there until 2000, but has since climbed by 16 percent. St. Louis attracted more young people than it lost in each of the past three years. And as a mountain of “Viva Detroit!” news stories have made clear, Motor City is now the official cool-kids destination, adding thousands of young artists, entrepreneurs and urban farmers even as its general population evaporates.

It’s a surprising demographic shift that has some in the Rust Belt wondering if these cities should trumpet their gritty, hardscrabble personas, rather than try to pretend that they’re just like Chicago or Brooklyn, N.Y., but cheaper. Detroit has certainly proven that a city’s hard knocks can be marketed, from “ruin porn” coffee table books to award-winning Chrysler ads to “Detroit Hustles Harder” hoodies. Could other Midwestern cities go all-in on their own up-by-your-bootstraps appeal? “I think there’s a backlash in the American psyche that’s longing for that,” says Cleveland native Richey Piiparinen. “Look at Miami. We’ve learned that all that glitters isn’t gold.”