“I sent a letter to the Swiss Consulate requesting withdrawal of my dual Swiss citizenship, which was conferred upon me by operation of Swiss law when I married my husband in 1978,” she said. “I took this action because I want to make it perfectly clear: I was born in America and I am a proud American citizen. I am, and always have been, 100 percent committed to our United States Constitution and the United States of America. As the daughter of an Air Force veteran, stepdaughter of an Army veteran and sister of a Navy veteran, I am proud of my allegiance to the greatest nation the world has ever known.”

Yeah, she could have done it without the reprise of “The Stars and Stripes Forever” playing in the background. I think she did it because she found out that Switzerland is dedicated to peace and has universal healthcare. She doesn’t want to have anything to do with a neutral country that smacks of socialism.

But her husband does think that the Swiss guards are hot… 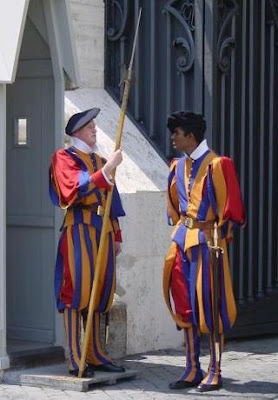