In the galactic equivalent of a massive paparazzi scoop, Japanese researchers in early June obtained an image of what they believe to be the furthest and consequently most ancient galaxy yet spotted by humankind, using two telescopes in Hawaii.

The galaxy’s name, the SXDF-NB1006-2, is a mouthful, but it is unquestionably an old and far away galaxy, at 12.91 billion light years from Earth near the constellation Cetus.

Further, it could shine light on the conditions of the universe shortly after the Big Bang, the enormous, sudden expansion of matter that is thought to have given birth to the universe some 13.7 billion years ago. 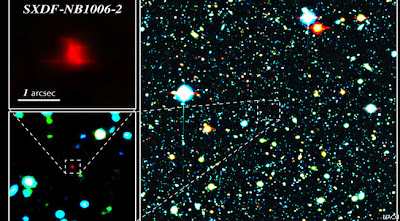 That’s it in the upper left panel.

It’s taken the light 12.91 billion years to get here. Which means that the universe is pretty damn big. And it puts things in perspective, too. Not to get all pop-philosophical, but when you think about the size of the universe in those terms, it makes complaining about having to park a little further away from the entrance to the supermarket sound silly.