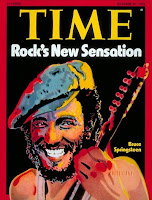 Look, I get it that us old gaffers like to indulge in retroing back to our youth; the carefree days of the 60’s… Vietnam, the draft, race riots… and the music that came from that time transcends the generations. Ad agencies are selling insurance, boner pills and adult diapers to the tune of classic rock ballads, and I see teens wearing Beatles and Rolling Stone t-shirts as if they were the latest fashion trend. If there’s a worthy ambassador of American rock, it is The Boss, who also transcends the ages; Bruce Springsteen was on the cover of both Time and Newsweek in the same week in 1975. And so I won’t begrudge David Brooks his overseas trip to see him in concert.

But does he have to be so unhip in sharing his buzz? He makes it sound like he’s on an anthropological dig:

Did it occur to them at that moment that, in fact, they were not born in the U.S.A.?

And did he have to go all Field of Dreams on us?

How was it that so many people in such a faraway place can be so personally committed to the deindustrializing landscape from New Jersey to Nebraska, the world Springsteen sings about? How is it they can be so enraptured at the mere mention of the Meadowlands or the Stone Pony, an Asbury Park, N.J., nightclub?

My best theory is this: When we are children, we invent these detailed imaginary worlds that the child psychologists call “paracosms.” These landscapes, sometimes complete with imaginary beasts, heroes and laws, help us orient ourselves in reality. They are structured mental communities that help us understand the wider world.

Millions of people know the contours of these remote landscapes, their typical characters, story lines, corruptions and challenges. If you build a passionate and highly localized moral landscape, people will come.

Only David Brooks could psychoanalyze a Springsteen concert into an epistle on self-awareness. Oh, and of course he has to bring in the presidential election and how to be more hip to the groove of the hoi polloi.

The whole experience makes me want to pull aside politicians and business leaders and maybe everyone else and offer some pious advice: Don’t try to be everyman. Don’t pretend you’re a member of every community you visit. Don’t try to be citizens of some artificial globalized community. Go deeper into your own tradition. Call more upon the geography of your own past. Be distinct and credible. People will come.

Oh, just shut up and listen to the music.