Voyager 1 is about to leave the last vestiges of the solar system.

With absolutely no attempt at hyperbole at all, it is fair to say that this is one of – if not the – biggest achievement of the human race.

For, as we speak, an object conceived in the human mind, and built by our tools, and launched from our planet, is sailing out of the further depths of our solar system – and will be the first object made by man to sail out into interstellar space.

Indications over the last week implies that Voyager 1 is now leaving the heliosphere – the last vestige of this solar system.

And this is what we — as in Earth — look like from that distance. 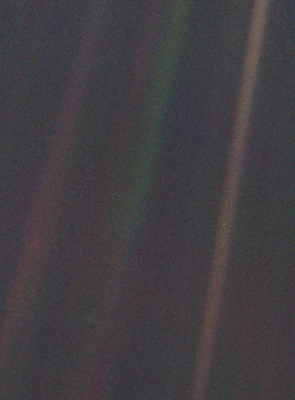 Seen from about 6 billion kilometers (3.7 billion miles), Earth appears as a tiny dot (the blueish-white speck approximately halfway down the brown band to the right) within the darkness of deep space. [Via]