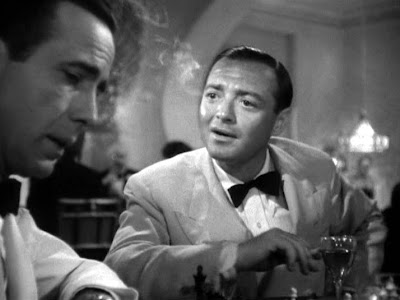 Ugarte: Rick, think of all the poor devils who can’t meet Renault’s price. I get it for them for half. Is that so… parasitic?

Rick: I don’t mind a parasite. I object to a cut-rate one.

For some reason that quote came to mind when I read Jonathan Bernstein’s post in Salon yesterday.

It’s not just that Romney lies; it’s the quality of the lies, the indifference to any fact-checking, the insistence on continuing to use a lie long after it’s been definitively debunked.

I have a name for it, and an explanation. Call it lazy mendacity.

His explanation is that with all the information floating out there on the internet, plus the partisan-aligned media — Fox News and right-wing talk radio, for example — there’s a lot of time to fill, and they need something to fill the air. Second, their standards for the truth and reality are lower than the average tabloid, and they know their listeners aren’t going to fact-check them, especially if they confirm their worst fears or highest hopes. Hell, if you can sell Hair In A Can to the eager public, they’ll go for the fake birth certificate.

There’s also the fact that the people who could call them out on the lies won’t do it. They’re either lazy themselves, or they don’t feel that it’s their job to say to a candidate, “Excuse me, but you know that’s not true, and here’s the proof. Why do you keep saying it?” If they did, the candidate would just repeat the lie, the pundits would attack the questioner for being a partisan hack, and they would never get the candidate back on their airwaves. As it is, Jon Stewart seems to be the only person out there willing to call out a candidate for lying, and he’s on Comedy Central.

And in keeping with the spirit of Rick’s sentiment, if Mitt Romney is going to lie about Barack Obama’s record, can he at least make them more creative and harder to disprove? I don’t mind a liar. I object to a cut-rate one.