The rich and the uber-rich gathered this weekend in the Hamptons to rattle their jewelry for Mitt Romney. And it was a wonderful affair, or so we hear; we’ll have to wait until Muffy and Skip get back so they can tell us what a grand time they had. Or we can read about it in the Society pages of the Los Angeles Times: 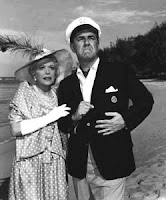 The line of Range Rovers, BMWs, Porsche roadsters and one gleaming cherry red Ferrari began queuing outside of Revlon Chairman Ronald Perelman’s estate off Montauk Highway long before Romney arrived, as campaign aides and staffers in white polo shirts emblazoned with the logo of Perelman’s property — the Creeks — checked off names under tight security.

They came with high hopes for the presumed Republican nominee, who is locked in a tight race with President Obama. And some were eager to give the candidate some advice about the next four months.

A New York City donor a few cars back, who also would not give her name, said Romney needed to do a better job connecting. “I don’t think the common person is getting it,” she said from the passenger seat of a Range Rover stamped with East Hampton beach permits. “Nobody understands why Obama is hurting them.

Yeah, lady, we get it: you’re a privileged nouveau riche ass, and people like you are why the French had a revolution.