The wingnut chorus has been singing the same tune: “Obamacare is the largest tax hike in the history of the universe” or some variation thereof.

Bullshit. It doesn’t even come close to being the largest tax hike in the last sixty years. Or even the last twenty. 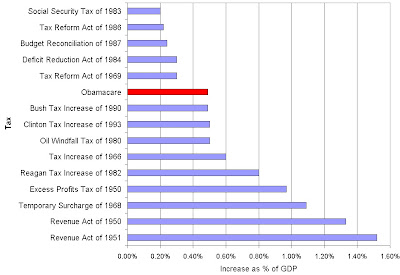 But wait; we’re not even sure if the individual mandate is a tax. The Supreme Court says it is, which makes the GOP happy because it feeds their “Obama raised taxes” meme, but Eric Fehrnstrom, an adviser for the Romney campaign (you remember him; Mr. Etch-A-Sketch), says it’s a penalty because the individual mandate in the Romney healthcare law in Massachusetts — the model for the ACA — was not a tax.

TODD: The governor does not believe the mandate is a tax? That is what you’re saying?

FEHRNSTROM: The governor believes what we put in place in Massachusetts was a penalty and he disagrees with the Court’s ruling that it is not a tax.

TODD: But he agrees with the president that it is not — and he believes that you should not call the tax penalty a tax, you should call it a penalty or a fee or a fine?

Nice to have you on board, Eric.