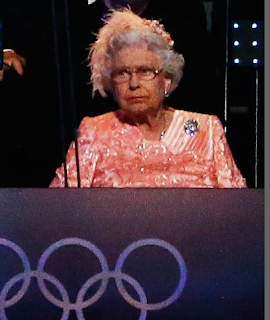 I went to an Opening Ceremonies party last night given by friends who do it for every Olympics. They serve food that is representative of the host country, so the menu included roast beef, Yorkshire pudding, bangers and mash, and all sorts of delightful desserts.

I made it through about two-thirds of the opening ceremony, then headed home and watched the rest of it until the giant magic fire cauldron engulfed the skyline of London. The whole thing was kind of surreal British history as a giant half-time show: Kenneth Branagh dressed up like Doctor Doolittle (the one in the books, not the recent movie) reciting Shakespeare; dancing laborers doing an Oliver!-like chorus number; dancing nurses celebrating socialized medicine; a giant blow-up baby doll; Mr. Bean doing P.D.Q. Bach; Pink Floyd; Frankie Say Relax (those hip kids); choruses of children singing national songs; Paul McCartney sounding nothing like he used to; and all presided over by Queen Elizabeth who looked like she would rather be doing anything else but sit in the royal box, including skydiving with James Bond.

And who chose the icons of British history? Mary Poppins battled Voldemort, but where was Frodo against Sauron? (Unless the towering smokestacks were a nod to Isengard…) Where was Aslan and Naria? What about Swallows and Amazons? For that matter, what about Dickens, Wuthering Heights, Jane Austen, James Herriot, and Monty Python?

Of course, if they had included all of the important British contributions, they’d still be going on, so I can’t really complain too much. Usually these ceremonies are agonizing, but this one was at least entertaining. Too bad Her Majesty didn’t seem to find it amusing.

PS: According to Michael, NBC censored a part of the ceremony: a tribute to the victims of the terrorist attack in London that killed 52 people. Instead they showed an interview with Michael Phelps by Ryan Secrest. I guess NBC doesn’t want to remind the world that terrible things happen. Now we are not amused.