ABC News caught Mitt Romney meeting quietly with some of his friends on a yacht in Tampa Bay.

Gov. Mitt Romney’s campaign toasted its top donors Wednesday aboard a 150-foot yacht flying the flag of the Cayman Islands.

The floating party, hosted by a Florida developer on his yacht “Cracker Bay,” was one of a dozen exclusive events meant to nurture those who have raised more than $1 million for Romney’s bid. [Emphasis added.] 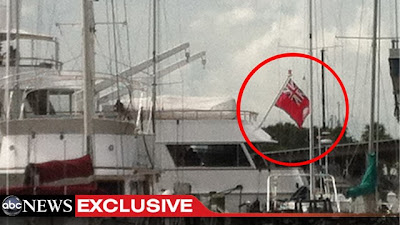 Mr. Romney was just visiting some of his money while it was in town for the convention.