What did I tell you?

Ryan Lizza has a profile of the candidate in The New Yorker, and he reacts to the pick in a blog post this morning.

For one thing, Ryan has no significant private-sector experience. Besides summer jobs working at McDonald’s or at his family’s construction company, or waiting tables as a young Washington staffer, Ryan has none of the business-world experience Romney frequently touts as essential for governing. In the run-up to his first campaign for Congress, in 1998, that gap was enough of a concern for Ryan that he briefly became a “marketing consultant” at the family business, an obvious bit of résumé puffing.

But Ryan’s Washington experience is also light, at least for a potential President—which, after all, is the main job description of a Vice-President. Ryan has worked as a think-tank staffer and Congressman, but he’s never been in charge of a large organization, and he has little experience with foreign policy. Given how Sarah Palin was criticized for her lack of such experience, I’m surprised that Romney would pick someone whose ability to immediately step into the top job is open to question.

And the experience that Ryan does have is not exactly what voters are clamoring for at the moment. The bulk of Ryan’s House career coincided with the Presidency of George W. Bush, during which he was a reliable vote for many Bush policies that have not aged well: Medicare Part D; the Iraq War; and the Troubled Asset Relief Program. Ryan told me that voting for all of that spending, which added trillions to the deficit, made him “miserable,” but he’ll need a better explanation in his October debate with Joe Biden.

Paul Ryan is an authentically dangerous zealot. He does not want to reform entitlements. He wants to eliminate them. He wants to eliminate them because he doesn’t believe they are a legitimate function of government. He is a smiling, aw-shucks murderer of opportunity, a creator of dystopias in which he never will have to live. This now is an argument not over what kind of political commonwealth we will have, but rather whether or not we will have one at all, because Paul Ryan does not believe in the most primary institution of that commonwealth — our government. The first three words of the Preamble to the Constitution make a lie out of every speech he’s ever given. He looks at the country and sees its government as an something alien that is holding down the individual entrepreneurial genius of 200 million people, and not as their creation, and the vehicle through which that genius can be channelled for the general welfare.

Brace yourself for a lot of Eddie Munster comparisons. 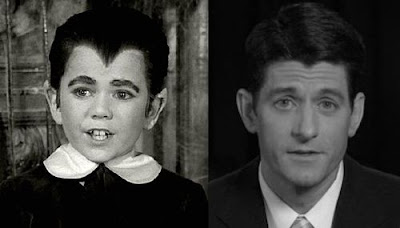