Ryan’s Party — Jonathan Chait says that by choosing Paul Ryan, Mitt Romney turns the GOP over to the hard-core.

Romney has made the risky but defensible calculation that, if he is to concur with most of his party’s ideological baggage, he might as well bring aboard its best salesman. And Ryan is that. During his rise to power he has displayed an awesome political talent. He is ambitious but constantly described by others as foreswearing ambition. He comes from a wealthy background but has defined himself as “blue collar,” because he comes from a place that is predominantly blue collar. He spent the entire Bush administration either supporting the administration’s deficit-increasing policies, or proposing alternative policies that would have created much higher deficits than even Bush could stomach, but came away from it with a reputation as the ultimate champion of fiscal responsibility.

What makes Ryan so extraordinary is that he is not just a handsome slickster skilled at conveying sincerity with a winsome heartland affect. Pols like that come along every year. He is also (as Rich Yeselson put it) the chief party theoretician. Far more than even Ronald Reagan, he is deeply grounded is the ideological precepts of the conservative movement — a longtime Ayn Rand devotee who imbibed deeply from the lunatic supply-side tracts of Jude Wanniski and George Gilder. He has not merely formed an alliance with the movement, he is a product of it.

In this sense, Ryan’s nomination represents an important historical marker and the completion of a 50-year struggle. Starting in the early sixties, conservative activists set out to seize control of the Republican Party. At the time the party was firmly in the hands of Establishmentarians who had made their peace with the New Deal, but the activists regarded the entire development of the modern regulatory and welfare states as a horrific assault on freedom bound to lead to imminent societal collapse. In fits and starts, the conservatives slowly advanced – nominating Goldwater, retreating under Nixon, nominating Reagan, retreating as Reagan sought to govern, and on and on through Gingrich, Bush, and his successors.

Over time the movement and the party have grown synonymous, and Ryan’s nominations represents a moment when the conservative movement ceased to control the politicians from behind the scenes and openly assumed the mantle of power.

Telling Time on Mars — Rebecca J. Rosen on how to make a watch to run on Martian time. 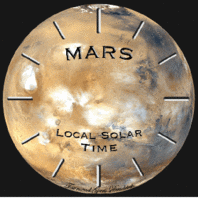 Time on Mars isn’t just a conversion the way that we add or subtract hours to change time zones here on Earth. Mars actually spins a bit slower than our own planet, and as a result, its whole day is a bit longer — 24 Earth hours and 39 Earth minutes. (This means that the 3037 Sols — Martian days — that Opportunity has been on the planet is something close to 3119 Earth days.) But the convention is to still use a 24-hour day with a 60-minute hour, meaning that each minute on Mars last longer than each minute on Earth.

For scientists who work on the Mars missions, this can mean that the schedule of their work shifts by 39 minutes every day. A wonderful little story about this came out of the 2004 Opportunity landing. As Julie Townsend, a Mars rover team member explained at the time, “Everything on this mission is based on local solar time on Mars. From home, during the mission practice tests, it was very difficult to constantly translate Earth time to Mars time.” So the team turned to master watchmaker Garo Anserlian to craft special Martian-time watches.

“Since I was a young child I’ve put my heart into making very precise time pieces, now I was being asked to create a watch that was slow on purpose,” Anserlian mused. He spent two months designing and building his Martian clock, attaching tiny lead weights to slow the wheels and hands. His first effort was only off by 10 seconds, and from there, he fine-tuned it to get it exactly right. Once he had his working model, he could replicate it pretty easily for anyone on the rover team who wanted one. Anserlian told NASA that when he watched Opportunity land, “I felt proud; I got goosebumps. I saw that some of them had two watches on and I thought, one of them was mine! I was proud as an American that it landed and secondly that my watches will be used.”

Leaving Hate Behind — A former skinhead tells how he escaped the hate.

I first found true love through violence. I was 10, hanging out with my cousin, who was pushing and antagonizing me. Finally, I snapped and started using my karate moves against him. By the time we were done fighting, I had dislocated three of his fingers and his shoulder. My aunt was furious, yelling at my father over what I had done. But my father couldn’t have been prouder. He gave me a hug and a kiss, the most meaningful embrace and words of love I’d ever received from him.

I chased that euphoric high for years, beating up neighborhood bullies and later getting into punk-rock music. At one show, I befriended some older, tough kids who were skinheads. I was drawn into their world pretty quickly as they took me under their wing and encouraged my violent tendencies. For the first time, I had older brothers who looked out for me; their camaraderie felt like an extension of my father’s love.

I’ve since climbed out of that world of hate and have spent 15 years atoning for my past. But the tragedy of this past week, when Wade Michael Page killed six people at a Wisconsin Sikh temple, pulls me back into the memories of those years. I’ve met a lot of people who could easily do what Page, who had ties to white supremacist groups, did. Such atrocities make me wonder: Could my former self have committed a similar act? Could I have been Wade Michael Page? It makes me sick to say that I don’t know.

Since leaving the skinheads, I’ve been working with troubled kids, counseling them on how to escape the seductive grip of violence and hate. I’ve gotten 86 kids out of the white-supremacist movement across the country, almost as many as I helped draw into that culture when I was younger. I have a lot more work to do.