Isaac tromps on, skirting the north coast of Cuba and still on track to cross the Keys and into the Gulf. It now tracks more to the west, heading towards the northern Gulf for New Orleans and Louisiana.

All of South Florida is under a state of emergency, and the GOP convention in Tampa has cancelled Monday’s events.

Update 1: Here’s the 11:00 AM tracking map, showing a further shift to the west.

Here in Miami we’re still getting outer bands of wind and rain, and it’s brought down a few palm fronds and tree branches in my yard. Luckily the wind is from the east, so the branches landed harmlessly away from the house. 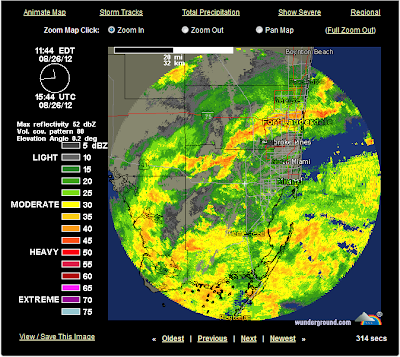 Update 2: The hurricane watch has been lifted for Miami-Dade County.

By early afternoon Sunday, forecasters said the tropical storm had probably delivered its biggest and windiest punch — with gusts along the coast peaking at 55-miles-per-hour overnight but considerably less inland.

More gusty bands could still roll across mainland South Florida but they were unlikely to get stronger, said Robert Molleda, warning coordination meteorologist for the National Weather Service’s Miami office.

“The strongest winds we’ll get are going to come now and this afternoon,’’ said Molleda during a 12:30 p.m. phone briefing.

The Florida Keys, however, will remain under the gun for most of the day as Isaac approaches. But the latest advisory, issued at 2 p.m., said the threat that Isaac would strike Key West at hurricane strength is decreasing.

But there’s still a lot of punch left in Isaac for the Keys and the Gulf, so the folks there should watch out.