Tomorrow is my sixtieth birthday. I don’t normally go in for big celebrations, but 60 seems like a pretty big number, so I decided to invite some friends over for some drinks and light fare and — of course — some cake.

In honor of this birthday, my parents, in cahoots with Bob, came up with a great idea for some home improvement for the patio. Seeing as how I have a nice yard and a nice view of the waterway behind the house, having a place to sit and watch the occasional canoeist or jet-ski go by while I do the crossword puzzle makes perfect sense.

This past Tuesday I was greeted at home by a large box on the porch which later disgorged — with some assembly required — a lovely patio furniture set. 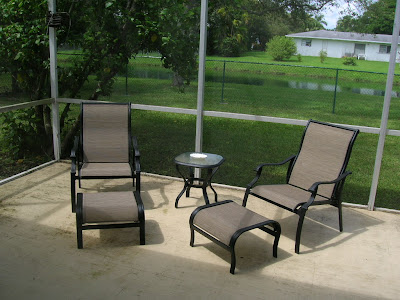 It goes very nicely with the aging teak furniture that I got nearly twenty-five years ago from the same thoughtful parents and has graced my yard in Longmont, Petoskey, Albuquerque, Coral Gables, and now here. The green fanny-pads and seat-backs were made by Allen, who liked to sit outside to read (and smoke), but didn’t like the slats making dents in his butt. 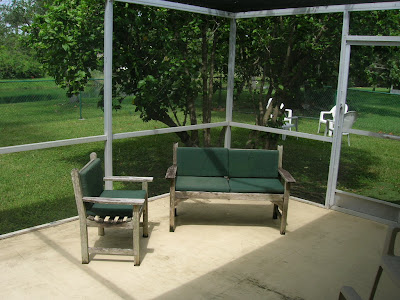 I’ll have some more thoughts on the beginning of my seventh decade tomorrow, but for now, I’m looking forward to welcoming friends and sharing good times and aged beverages (including Vernor’s Ginger Ale) with friends.

PS: Yes, you Tolkienists will recognize the post title. This party won’t have the same outcome.