Born to Run — Hendrik Hertzberg on Bill Clinton at the DNC.

On Fox News, after Bill Clinton’s speech, Brit Hume, while admitting grudgingly that it was “convincing” and “able to deal with facts,” dismissed what he had just heard as “wonky,” “self-indulgent,” and “thirty per cent too long.”

1. A psychoanalytic hour.
2. A college lecture.
3. An episode of “The Sopranos.”

Clinton’s speech—which, especially if President Obama is reëlected, will be remembered as one of the greatest tours de force in convention history—had elements of all three at their best. Like a session on Dr. Freud’s couch, it deployed insight to therapeutic effect. Like a lecture by a master of the form and the material (a Michael Sandel, say, or a Carl Sagan), it both educated and enchanted. Like HBO’s most addicting drama, it was ridiculously entertaining (and its lead character, a larger-than-life rogue, is someone it’s inadvisable to cross).

Shaping his arguments with those big hands as well as that hoarse voice, Clinton defended Obama’s economic record and eviscerated virtually every Republican critique of that record, one by one, issue by issue: jobs and unemployment; the auto bailout; energy policy; health care; the deficit and the debt. He explained in patient detail why Republican accusations that Obama has weakened Medicare and gutted welfare-to-work requirements are “just not true.”

Does that sound dull? Well, it wasn’t. The audience in the hall was enthralled, and so were “the folks at home.” My home, anyway.

Partly, I think, we were enthralled because he was enthralled. There was a script on the teleprompter, but wasn’t “reading” it; he was improvising on it in a, yes, disciplined way, the way a jazz soloist improvises on a familiar melody. His repeated admonitions—“Listen to this,” “Listen to this, everybody,” “Listen to me, now,” “Are you listening in Michigan and Ohio?,” “Now, finally, listen,” “Y’all you all got to listen carefully to this, this is really important”—came across not as hectoring but as breathless invitations, as if he was about to confide a particularly choice morsel of gossip. Each time he swivelled to a new issue—“Now, let’s talk about the debt”—you had the very opposite of a sinking sensation. You had a small thrill of delicious anticipation. O.K., let’s see how he puts this one away.

Fifty minutes? When Bill Clinton was President, he delivered nine State of the Union addresses. The first one clocked in at over an hour, and so did all eight of the rest. (Of the previous twenty-eight S.O.U.’s, just one—L.B.J.’s in 1967—had exceeded the sixty-minute mark.) The first couple of times Clinton did this, post-speech pundits opined that he’d gone on way too long, that he’d buried the audience’s patience under an avalanche of numbing detail. Polls and focus groups showed that the folks at home did not agree. They liked the length and they liked the detail.

Life on Mars — The same guy who drives his kids to daycare also drives Curiosity.

Matt Heverly, 36, started a recent workday as any young father might: up at 5:30, gulping coffee, fixing a bottle for the baby. He threw on jeans and a T-shirt and drove his two sons to day care. He stopped to get the brakes on his Toyota checked and swung by the bank.

Then he went to the office … to drive a $2.5 billion robot on Mars.

Mr. Heverly leads a team of 16 drivers at NASA’s Jet Propulsion Laboratory here. Together, they are responsible for steering a six-wheeled, plutonium-powered rover called Curiosity across the Red Planet’s Gale Crater. Equipped with futuristic tools like a laser that can vaporize rock, the 2,000-pound robot arrived on Mars on Aug. 6, and Mr. Heverly took the wheel — or computer keyboard, actually — on Aug. 22.

“Driving” a rover might be a misleading term. There is no joystick or accelerator, for a start. Mr. Heverly and his teammates tell the vehicle where to go next by entering hundreds of computer commands.

Also, the driving is not done in real time: during the Martian night, the team plans where to send Curiosity next and sends instructions via radio transmission as the Mars day begins. Then the drivers go home, back to life on Earth, with all of its “don’t forget to take out the garbage” mundanity.

“You have to try not to think about what’s happening out there, which is, of course, completely impossible,” Vandi Tompkins, 39, one of the drivers, said with caffeinated exuberance.

“The rover may be executing a successful drive based on your instructions,” she said, “or you may have just sent a national asset over a cliff.”

Or, as Mr. Heverly put it, “Last night I drove on Mars, today I mowed the lawn — it’s completely surreal.” 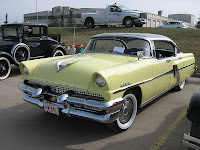 These are among the cars once created specifically for Canada, and usually built in Canada, by the Detroit-based automakers. In their heyday, from the end of World War II until the late 1960s — a period of true mechanical distinctions between, say, Chevrolets and Pontiacs — the Canadianized cars shamelessly borrowed parts and styling from their sister divisions.

Once common on Canadian roads, such cars have become, even here, largely forgotten historical footnotes.

When Denise Côté, a retired government secretary in Ottawa, went to register her 1957 Monarch Lucerne, the Ontario Ministry of Transportation would have no part of it. Until Ms. Côté commissioned an auto historian to provide the government a history of Ford Canada’s Monarch brand, the license bureau would register her car only as a Mercury Monarch, a model that wasn’t produced until the late 1970s and was sold on both sides of the border.

“It is a Monarch Lucerne; it is not a Mercury,” said Ms. Côté, a longtime car fancier. Referring to the bureaucrats, she said, “They wouldn’t change it for the world, and they eventually had to call Toronto to do it.”

A variety of factors inspired the Canadian subsidiaries of Ford, General Motors and Chrysler to create Canada-only models. But the sometimes oddball results came into being, and then faded away, largely because of import tariffs.

Until the United States and Canada signed an agreement in 1965 creating cross-border free trade in cars and auto parts, vehicles imported to Canada from the United States were subject to duties of as much as 35 percent. To avoid the duties, automakers struggled to find economical ways to squeeze a wide range of models onto single assembly lines in their Canadian factories.

The models were not adapted to Canadian roads, which aside from the snow and ice, were generally poorer, at the time, than American roads.

“Was there any design or engineering done?” said Sharon Babaian, curator of transport at the Canada Science and Technology Museum. “No, not really. It was very, very cosmetic. I think they probably put more money into the marketing than they did into the actual changing of the style of the vehicle.”