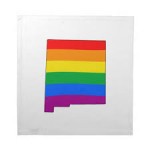 New Mexico does not have a law or constitutional amendment on the books about marriage equality.  It is, I think, the only state in the union that is basically silent on the issue.  When I lived there from 1995 to 2001, my partner and I just assumed that it was against the law, so we never even considered getting married.

But some people have, and they’re doing it, and the state’s attorney general isn’t going to try to stop them.

Attorney General Gary King said even though he has cautioned county clerks not to issue marriage licenses to same-sex couples until a court rules on the matter, he will not intervene in Las Cruces, where the Doña Ana County clerk began issuing licenses Wednesday to gay couples.

King, in a telephone interview, noted that he has filed briefs in a pending lawsuit, expressing the belief that the state’s prohibition against same-sex marriage is unconstitutional. It would be hard to argue the other way in an action against Doña Ana County Clerk Lynn Ellins, he said.

Who might have standing in court to file an action against the clerk, besides the state attorney general?

King said legislators or other Doña Ana officials — the county attorney or county manager — might have such standing.

The Associated Press reported that same-sex couples began arriving at the Clerk’s Office in Las Cruces on Wednesday, soon after learning of the announcement by Ellins.

The wire service quoted Char Ullman, 51, saying, “I was in a coffee shop grading dissertations when my partner sent me an email saying, ‘You want to get married?’ I went home to brush my teeth and headed to the courthouse.”

King said it’s possible that other county clerks around the state might follow suit. (Santa Fe County Clerk Geraldine Salazar told the AP on Wednesday, however, that she would wait until the issue is settled in court.) There could be a situation in which same-sex couples in counties that don’t allow same-sex marriage would travel to counties to get married.

“It leaves the state in an uncertain position,” King said. “I think there’s still some risk that there will be some people who think they are married when they aren’t.”

Although the state supreme court could rule against them, it would be interesting to see if they look at the law, the happy couples, and decide “oh, what the hell,” let them be.  That’s how they roll in New Mexico.

4 barks and woofs on “Land of Enchantment”