Here’s a shot of what’s on a local TV station’s news site concerning the shooting at the Fort Lauderdale airport last Friday that killed five people: 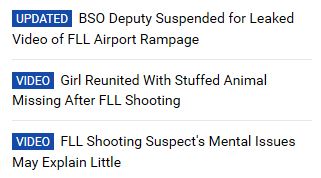 Well, I’m glad the little girl got her teddy back after dropping it in the chaos, and it was poor judgment on the part of the Broward Sheriffs Office deputy to post the video.  But the shrug about the shooting suspect’s “mental issues” is just another way of saying, “Well, shit happens.”

I suppose, in the world of tweeting autocrats and instant news feeds on phones, we should now be accustomed to the idea of moving on, leaving the mourning and the legal issues to others.  So don’t expect any in-depth investigation into why a man who recognized he was so tortured by his illness that he went to the FBI and basically said “Stop me before I kill someone,” then went out and did it.

No, we can’t arrest someone for a crime they haven’t yet committed, and yes, there are people among us who sincerely believe that someone who is suffering from obvious violent thoughts is still entitled to his Second Amendment rights.  All we have to do is just wait for the next news cycle to move on.

One bark on “Moving Right Along”