The Trump administration is looking to build tent cities at military posts around Texas to shelter the increasing number of unaccompanied migrant children being held in detention.

The Department of Health and Human Services will visit Fort Bliss, a sprawling Army base near El Paso in the coming weeks to look at a parcel of land where the administration is considering building a tent city to hold between 1,000 and 5,000 children, according to U.S. officials and other sources familiar with the plans.

HHS officials confirmed that they’re looking at the Fort Bliss site along with Dyess Air Force Base in Abilene and Goodfellow AFB in San Angelo for potential use as temporary shelters.

“HHS will make the determination if any of the three sites assessed are suitable,” said an HHS official.

It gets hot in Texas in the summer.  Very hot.  The average high in San Angelo in July is 95 F.  People left out in the sun die from heat exhaustion.  Air conditioning a tent is like trying to cool your house by leaving the freezer open.

But that’s just the practical side of the matter.  What kind of country separates children from their parents, regardless of the legal status, and forces them in to a refugee camp? 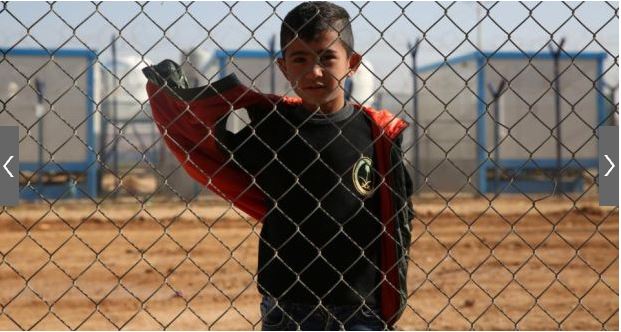 Every day when Ali Jibraail wakes up he worries about his falafel shop. Will this be the day the electricity generator fails? Can he continue to ward off an increasing number of competitors? Might his suppliers begin to resent crossing the desert to make deliveries and raise their prices?

This is Zaatari refugee camp in Jordan, home to 80,000 Syrians who have fled the devastating war, and – established four years ago – Jibraail’s is its longest serving restaurant.

The restaurant is located on Zaatari’s main shopping street – where residents can procure everything from bicycles to wedding dresses to canaries. UN workers cheerfully title it the “Champs Élysées”. “But only the foreigners call it that,” says Ala (25) from Daraa in southwest Syria. “We call it Hamidiyah market – [after] the largest market in [the Syrian capital] Damascus.”

This month the Syrian war enters its seventh year. With no end in sight, life for the displaced trundles on through births, deaths and marriages – milestones muted by the feeling of transience. A sizeable portion of Zaatari’s residents have more significant memories inside the camp than out.

Cradling her newborn son in a ward of the on-site field hospital, 16-year-old Amal Hamoud hasn’t been to school since she left Syria and was forced to abandon 5th grade. “My son looks like his father,” she says.

At least in this camp, in the heart of one of the worst humanitarian crisis since the end of World War II, they’re not separating children from parents.

Of course there’s a difference between the civil war in Syria and immigration across the U.S. southern border.  But how we’re handling it tells us a lot about our country and who’s running it.

3 barks and woofs on “Camping Out”